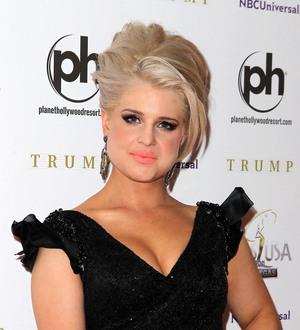 Kelly Osbourne spent much of Monday (08Aug11) reaching out to pals in London to ensure they weren't caught up in the city's riots.

The reality TV star took to Twitter.com to vent her frustrations about what was happening back home as she sat in her Los Angeles pad, confessing she couldn't take her eyes off the ongoing unrest, which began at the weekend (06Aug11).

She posted, "I literally cant (sic) leave my lap top busy making sure friends are safe and glued to the news."

She later added, "Spent the last 3 hours trying to get hold of all my friends in london finally the last one texted me back & is home safe. i need a nap!"

Kelly Osbourne also sparked controversy when she suggested the police were not prepared for the riots, which were organized through social networking sites like Twitter.com.

She added, "w/ (with) the greatest of respect the police are not educated enough 2 deal with this kind of destruction so why dont they bring in the b**ody army."

Kelly Osbourne's mum Sharon also hit Twitter to comment on the violence, writing, "World has gone crazy. What is happening in England. Senseless." And newlywed Lily Allen asked, "Are we on the brink of civil war or something?"

Meanwhile, hip-hop star M.I.A. was stunned to learn her cousin's restaurant and jewelry store in Croydon had been looted during the riots there.

She also took to Twitter to give followers a running commentary and wrote, "A five year old is walking round looting my cousin's shop."

The unrest has prompted Britain's Prime Minister David Cameron to cut short his holiday in Italy and head home for crisis talks.

The riots were prompted by the death of a 29-year-old father-of-four, who was shot by London police on Thursday (04Aug11). Reports suggest the ongoing violence is in part a protest against the British government's welfare cutting programs.