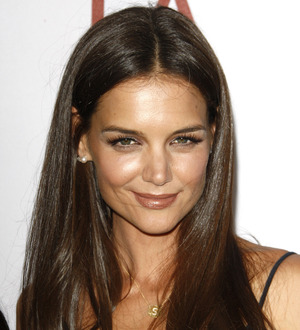 Katie Holmes has personally approved a Daniel Radcliffe gag in his hit Broadway musical How To Succeed In Business Without Really Trying that pokes fun at her husband Tom Cruise.

The Harry Potter star bounces up and down on a sofa as he declares his love for a co-star in the production - just like Tom Cruise did when he was trying to describe his feelings for Katie Holmes at the start of their romance on Oprah Winfrey's talk show.

Dnaiel Radcliffe has made no secret of the fact the theater moment is a dig at the Mission: Impossible star - and he was relieved when the movie star's wife told him she got the joke and thought it was funny.

He tells TV show Access Hollywood Live, "It is a Tom Cruise moment, jumping up and down on the sofa. That was one of the jokes that I can say, 'That was mine'. It's totally anachronistic and wrong for the period, but I really didn't care. It made me laugh in rehearsals.

"Katie Holmes has since seen the show and actually commented and particularly liked that joke... I got very very paranoid that night because she was in the audience and I did it and the audience reaction wasn't nearly as much as it normally is (sic)."