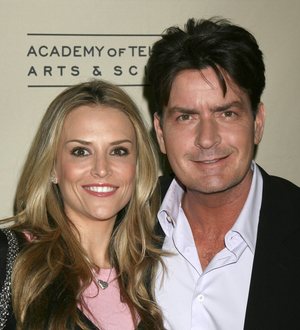 Charlie Sheen has treated his estranged wife Brooke Mueller to a vacation in Mexico to reward her for remaining "sober and healthy".

The former Two and a Half Men star split from Brooke Mueller after a heated altercation on Christmas Day in 2009, and they subsequently became embroiled in a custody battle over their twins, Bob and Max.

Brooke Mueller checked into rehab to address her addiction demons following the split, but continued to care for the pair's sons as Charlie Sheen battled his own much-publicised personal issues earlier this year (11).

And as a treat, Charlie Sheen, who recently revealed he is working hard to mend his relationship with his ex for the sake of their children, whisked Brooke Mueller to Mexico on a private jet on Friday (19Aug11).

He tells TMZ.com, "(Brooke Mueller's been) busting her a** with the boys, and (she's) more sober and healthy than I've ever seen her."