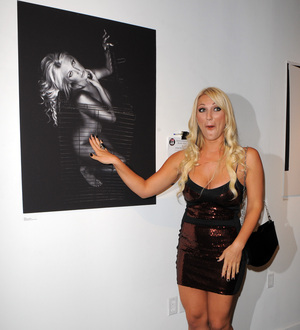 Hulk Hogan's daughter Brooke has posed nude in a cage to raise awareness about cruelty to animals.

The reality TV star agreed to strip off for photographer Jordan Michael Zuniga for the People for the Ethical Treatment of Animals' (PETA) Women in Cages exhibition and she is featured crouching down in a small enclosure and gripping her neck, placing her arm across her breasts to preserve her modesty.

She says, "I've always had a love for animals, and I've seen abuse first hand. It ignited my passion for saving them even more. The worst part is that they are voiceless in our world."

Brooke Hogan unveiled the black and white portrait at Miami, Florida's Cafeina Lounge on Thursday (11Aug11), but she's come under fire for taking her dad as her date to the big opening on his 58th birthday, with many bloggers criticising it as inappropriate.

The 23 year old hit back at the detractors and took to her Twitter.com page on Saturday (13Aug11), writing, "Im SO sick of people saying me and my dad are in some perverted relationship. Go home and do your own thing! Stop picking on me!"

At the exhibition launch, former wrestler Hulk Hogan joked around with his daughter, placing his hands over the photo in mock horror.