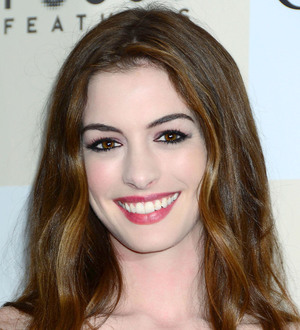 Anne Hathaway has found a new heroine in her Catwoman stunt double, insisting the daredevil is the "coolest, toughest, sweetest" woman she has ever met.

The actress plays the feline fatale in Christopher Nolan's upcoming Batman movie The Dark Knight Rises, and reveals she and her fight double have become unlikely work-out buddies.

She tells WENN, "I absolutely love it and there's noticeable results. She'll say, 'Put your fist here, put your leg here and do this many sit-ups and you'll be able to get your leg higher...'

"My stunt double is the coolest, toughest, sweetest woman I have ever met... We've been working out together and it's really inspiring to see a girl act tough around the boys."

Anne Hathaway admits she's even starting to feel like an action hero: "I've needed to develop specific skills and they actually have given me a martial arts exercise that I have to do all the time to teach me grace and proper stance and fluid movement. The stuff is beautiful and gentle but when you actually wind up doing the fight choreography all of a sudden you are hitting a block or somebody's throat.

"It's been a lot of fun and a new challenge and I really hope to do a lot more of it."

Meanwhile, Anne Hathaway's bike double in the blockbuster is nursing a bruised ego after crashing a motorcycle into hi-tech camera equipment during a shoot for the film in Pittsburgh, Pennsylvania on Friday (05Aug11). No one was injured in the accident, but the crash is estimated to have caused thousands of dollars of damage.