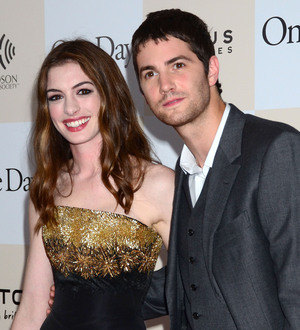 Anne Hathaway is grateful to the "discreet" Scots who have opted to keep cheeky footage of the actress mooning her bare behind at co-star JIM STURGESS to themselves.

The Devil Wears Prada beauty flashed her butt at her One Day leading man after a skinny-dipping scene without realising that her every move was being caught on camera phones by onlookers.

Hathaway feared the footage would become an immediate online must-see - but the Scots who filmed the prank have not leaked the saucy footage.

The actress says, "I decided to moon Jim after one take, and I thought, 'Oh this will be great' - because he was running towards me and the whole crew was behind me - and I thought that none of the crew will see it and only Jim.

"So I did it and was feeling really good about myself until I realised we were shooting on a street in Scotland and every single resident of the building we were shooting in front of was filming us.

"But the Scots are nice (and haven't posted the footage online)... They have manners and they are discreet. I'm so grateful."