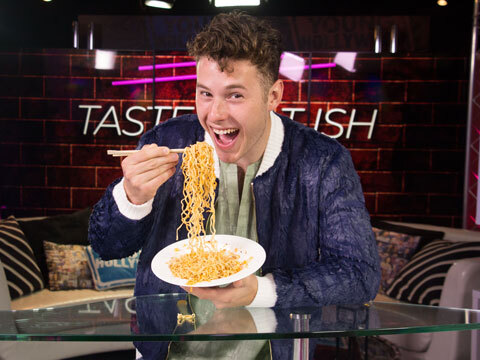 Taste That Ish with Nolan Gould

We literally watched Nolan Gould grow up before our very eyes, not just on his long-running, Emmy-winning ABC comedy series "Modern Family" but right here in the Young Hollywood Studio and beyond! This year, we say goodbye to the Dunphys and their wacky antics, but we are not through with Nolan quite yet! We invite the actor back to the YH Studio to put his sophisticated, 20-year-old taste buds to the test with another round of our new favorite game, "Taste That Ish" -- What's More $ Edition! Using only his sense of taste and his diverse culinary background, Nolan has to figure out which of two identical snack items is actually more expensive. See what he makes of it when we present him with brie cheese, ramen noodles (his favorite!), muffins, and more!