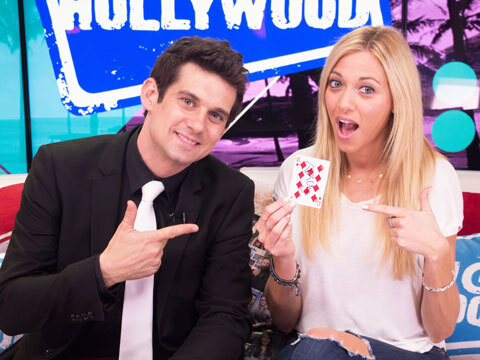 French entertainer Xavier Mortimer wowed audiences with his magic act on Seasons 10 and 12 of "America's Got Talent" but it wasn't enough to get him through to the finals either time, but don't worry because he got the last laugh, thanks to his own headlining show in Las Vegas, 'The Magical Dream' (making him the first ever Cirque du Soleil performer to get their own solo act)! The name of the show is appropriate, considering a Vegas residency is the ultimate goal for any magician, and if that wasn't quite enough, his show was voted the best magic act in Vegas, over the likes of David Copperfield and Penn & Teller! We invite Xavier to the Young Hollywood Studio to get an up-close taste of his phenomenal talents and what goes into creating his act, which is more than just card tricks and illusions -- it's an entire journey! Still, we love card tricks, and boy does he have a doozy, which he performs for us right there on the white couch and proceeds to blow all our minds out the back of our heads!