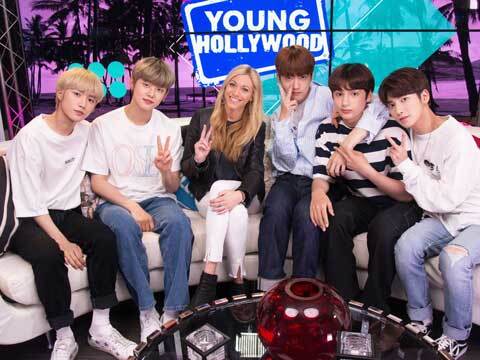 K-Pop's TOMORROW X TOGETHER Talk BTS, Touring, & The Meaning of Their Name

K-Pop fever continues in full force at the Young Hollywood Studio, and today we welcome to the white couch one of the newer -- but no less successful -- groups on the K-Pop scene, TOMORROW X TOGETHER! Having only been together for a few months, SOOBIN, YEONJUN, BEOMGYU, TAEHYUN, and HUENINGKAI have more than made their presence known in the K-Pop world, breaking records left and right, and being labelmates with none other than BTS doesn't hurt either! The boys tell us what advice they have received from BTS, plus they share some highlights from their first ever U.S. solo showcase tour to get the word out about their debut album 'The Dream Chapter: Star'. They also reveal the meaning behind their band name, discuss their hit singles "Crown" and "Cat & Dog", and send a special message to all their fans!