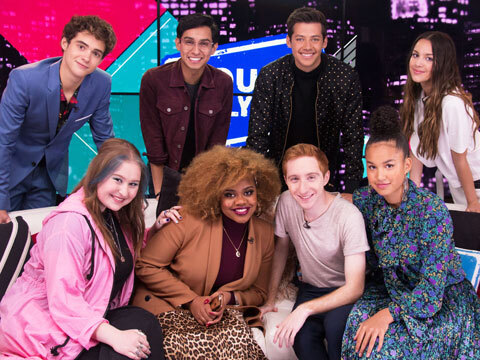 Over the years, the 'High School Musical' phenomenon has taken on a life of its own; the Disney saga of a group of plucky teenagers just trying to put on the best show possible has imprinted itself on a whole generation of kids, and now a new crop of talented teens are ready to take up the mantle from Troy, Gabriella, Sharpay, and the rest of the gang! It's a full house in the Young Hollywood Studio when we welcome the cast of Disney+'s brand new series, "High School Musical: The Musical: The Series" to gather round and interview each other about this unique new chapter in the HSM story! Sofia Wylie, Dara Renee, Julia Lester, Joshua Bassett, Olivia Rodrigo, Frankie A. Rodriguez, Larry Saperstein, and Matt Cornett share some behind the scenes stories and funny moments from set, plus find out their favorite jams from the original HSM movies, which OG star they'd love to do a scene with, and what other TV series they'd love to do a crossover episode with!