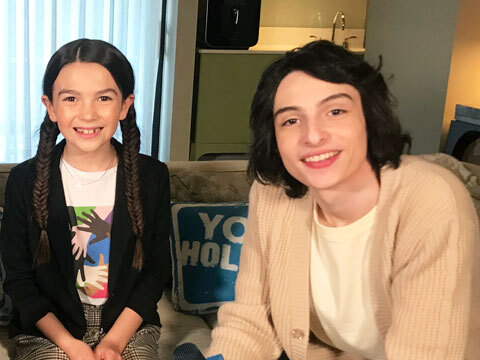 Finn Wolfhard & Brooklynn Prince Play Would You Rather: The Turning Edition

Finn Wolfhard and Brooklynn Prince are two of the most exciting young actors out there today, both making waves in respective projects like "Stranger Things" and 'The Florida Project'. Finn, in particular, knows a thing or two about the creepy side of fiction, thanks to other roles in 'IT' and the upcoming 'Ghostbusters; Afterlife', so when it came time to make another film adaptation of Henry James's classic horror novel 'The Turn of the Screw', casting him was a no-brainer! He and his on-screen sis Brooklynn return to the Young Hollywood Studio to scoop us on their experience filming 'The Turning', including the surprisingly chill vibe on set, getting snowed in in Ireland, and Finn's band The Auberys being featured on the soundtrack! Plus, the two stars play a few rounds of "Would You Rather?" based on some of the spooky goings-on featured in the film!