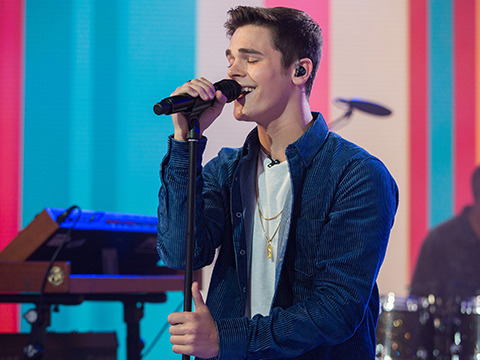 Behind the Scenes Look at AJ Mitchell's Unstoppable Video

Ever since releasing his first single only 3 years ago (a song which he wrote at the tender age of 13), singer/songwriter AJ Mitchell has been unstoppable, having had three songs in the Top 40 and gaining a huge following on YouTube thanks to his covers! His first full studio album, 'Skyview', contains tons of bops, including "Unstoppable", a single he released late last year and the steamy music video for which dropped in April. Young Hollywood caught up with the singer on the set of the music video where he gave us an exclusive behind the scenes tour during the shoot! Set inside a huge warehouse, AJ shows us around the actual area where he performs, plus he introduces us to his choreographer, shows us where he gets changed and gets his snacks, and sits down at a piano to play for us a snippet of a new song that he had been working on between takes!