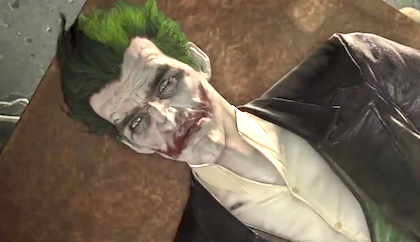 I must confess that I originally planned to treat you all to a stunning 5-page dissertation on the eating habits of Alfred Hitchcock and how they directly affected the films he made (Vertigo was especially affected by his late-night suppers), but a piece of news has slid across my desk that I could not, in good conscious, ignore.

Now I know that you’ve been hearing a lot about comic books and their subsequent movies recently, and the last thing I would ever want to do is completely destroy your love of such things by talking about them too much. On the other hand, this story has to do with one of the greatest graphic novels of all time (and my personal favorite), so at the risk of making this a very bad day for you, I’m going to prattle on for a bit about the plans in motion to adapt The Killing Joke into an animated feature.

Warner Bros. will be releasing The Killing Joke sometime in 2016, where it will join the ranks of their other acclaimed direct-to-DVD animated features including Under the Red Hood, Batman: Year One, and Batman: The Dark Knight Returns. Not much more is known about the production except that Bruce Timm, one of the geniuses behind Batman: The Animated Series, will produce the film. This is, in and of itself, great news as the makers of Batman: The Animated Series brought to the masses the greatest and most inspired vision of the Caped Crusader’s world, and their involvement in anything Batman-related should be mandatory. The Killing Joke will bring The Joker’s origin story from the pages to television screens around the world, and fans like myself are already chomping at the bit to see what is, hopefully, a worthy and proper adaptation.

There’s no word yet on who will be doing the voices, but fans are already clambering for the return of Mark Hamill to bring The Joker to life once again. Of all the Jokers out there, Mark Hamill is the one who remains cemented as the king in the hearts of millions of fans. Recently on Twitter, Mr. Hamill confirmed that his fingers were in fact crossed in regards to being contacted about the project. We’re with you, Mr. Hamill. Your Joker is the best, and bringing him back for The Killing Joke is the only way I can think of topping Batman: Mask of the Phantasm, which still remains the greatest Batman movie to date.

Listen up, Warner Bros., this idea ain’t a bad one. Peep the below clip from the video game Arkham Origins to see bits of The Killing Joke brought to life, and for an example of what Hamill can bring to the table. Oh, and bringing back Kevin Conroy as Batman wouldn’t hurt either.

Back in the day, before the advent of Alan Moore’s genius story, The Joker‘s backstory was as cemented in the shadows as a certain bat-garbed vigilante. Nobody knew what his real name was or why he turned to a psychotic life of crime. The only thing we really had to go on was a comic from the '60s which told us that The Joker used to use the alias The Red Hood (because he wore a red hood, you see) and had his appearance drastically changed to the clown-like visage we all know, love, and fear after Batman accidentally knocked him into a vat of chemicals. But other than that little nugget of info, we still knew very little about this man or where he came from. That all changed in The Killing Joke which told us the sad tale of how Batman’s greatest foe came to be. It’s hard to imagine developing any sympathy towards The Joker after all the mayhem and death he has brought about. What he does to Barbra Gordon (Batgirl) and her father Commissioner Gordon in this story is absolutely reprehensible, and yet, by the end of the novel, you really hope for one moment (as does Batman) that there may be a chance to rehabilitate this broken and dangerous man.

If you haven’t yet read this amazing graphic novel, then you are truly missing out on something special. You don’t even have to be a comic book fan to enjoy it. I didn’t give a flip about comics when I first read it, but afterwards my perspective on comics and The Joker (who is my absolute favorite fictional villain across the board) was changed forever. Let's hope Warner Bros. can give us a good day and reignite that dark magic once again.

UPDATE: As if this afternoon (Monday, July 27), Mark Hamill IS indeed confirmed to return as the voice of The Joker! Hooray!