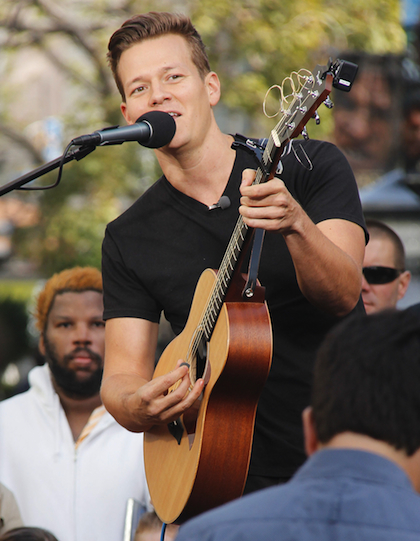 I am constantly amazed by the amount of talent that I stumble upon on YouTube! One guy who has really caught my attention is Tyler Ward. I listened to his cover of “Tonight Tonight” by Hot Chelle Rae, and I immediately fell in love with his rendition of the song because it was the first version I heard that was acoustic. Here’s the video:

This song was enough to catch my attention, so I checked out the rest of his videos, and I was very impressed. He not only had a good range of covers but also has a ton of original songs! Not to mention, he was pretty cute, which never hurts... After watching more of his videos, I had to know more about this kid.

Tyler has been on tour with artists like The Jonas Brothers, Gavin DeGraw, and The Fray. Not too shabby, right? I also found out that he started Tyler Ward Studios, where he has worked with Julia Sheer, The CO, and Cody Simpson, as well as many others. He has two studios, one in Nashville, Tennessee, and one in his home state, in Boulder, Colorado.

Tyler has also gone on tour with Boyce Avenue in late 2011 and has headlined his own tours in Europe, Canada, and the U.S.! Wow!

Tyler is a versatile singer and musician which can be seen in his videos ranging from covers of The Script, Bruno Mars, Justin Timberlake, The Goo Goo Dolls, and even Taylor Swift. There’s actually quite a few Taylor Swift covers on his channel, as a matter of fact. A little infatuation, maybe? Sure, sure, we all love a little T-Swift here and there. However, his original music is more alternative/pop rock.

Here’s a few of his most popular covers from his YouTube channel:

And now, here are a few of my favorite original Tyler Ward songs from his debut album, Hello. Love. Heartbreak. You can get all these songs and the whole album on iTunes.

Want to know more about the man behind the music? Well, Tyler didn’t start out knowing that he wanted to be a musician. After he graduated from high school, he went into the Air Force Academy for a football career. Tyler decided it wasn’t his thing, and so he went to the University of Northern Colorado where he found that his passion was in music and songwriting, and the rest is history. Tyler is always very thankful for his fans and their support. He says that they are the reason he can do music full time.

Tyler Ward -- Look out for this talented YouTuber! I’d like to end the article with one of my favorite videos of his that won me over. It’s in German, but I was really intrigued. I mean, who doesn’t love a little German rapping now and again, right?