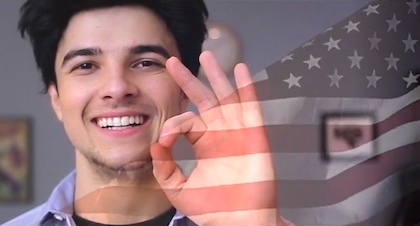 Mikey Bolts for President! [American flag waving in the background]

Who is Mikey Bolts, you ask?

Mikey Bolts is and has been a very prominent figure in the YouTube community. He creates music videos, skits, impressions, sketches, and many other types of videos. Here is one of my favorite videos from his channel just to give you a vibe for his humor and talent:

Mikey started out in 2008 making YouTube videos, and it’s his unique humor, down-to-earth personality, and crazy faces and impressions that make him so popular. Another reason why we love Mikey is how much he loves his fans. He’s always thanking them for all of the support. Keep doin’ you, Mikey! Thanks for just being you!

Check out his rendition of “Timber” by Pitbull ft. Kesha sung entirely in "Family Guy" voices!

To say that he’s a "Family Guy" fan would be an understatement. Check him out as a live-action Stewie!

But Mikey does more than impressions on his channel. Some of my favorite Mikey Bolts videos are his rants about random subjects!

He just described my exact relationship with Netflix.

And here’s his video of Eminem’s “Rap God”, "Family Guy"-Style. Because can you really get enough of "Family Guy"? No, you can’t.