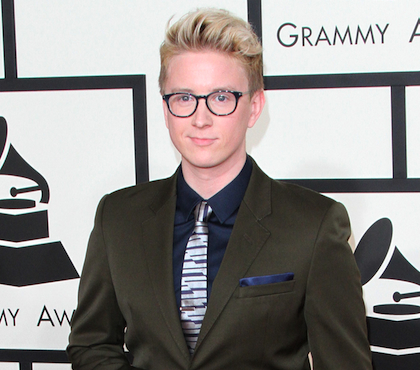 Can you say “Hocus Pocus”?

Tyler Oakley recently announced that he would be releasing his first book, Binge, and he also did something completely different and released a trailer for his own book. How awesome is that? We all know that Tyler is a BIG Disney fan and loves the move Hocus Pocus, and in that spirit, this trailer is every kid’s dream, especially for those of us who grew up in the '90s. Who wouldn’t want their own caldron to brew their own special potion… or, should I say, book?

Now, as an avid viewer of Tyler’s channel, I was a little confused when the video appeared to start with his outro. I thought, “What in the world is going on… is my computer broken?” Thankfully, it wasn’t, and Tyler gave us a little taste of what he has been brewing up… pun intended!

As Tyler enters his witchy lair, the audience begins to notice that he is throwing all of his signature items in a giant caldron. Form his PROFESSIONAL FANGIRL T-shirt to his flower crown -- everything that is Tyler is there. By the end of the video, you realize that he has simply been brewing his new book, Binge.

This was an incredible way to introduce what Tyler’s book is going to be about. All of these things embody Tyler and the person he is. This trailer makes me EXTREMELY excited to read his book, and I appreciate that he always has new and creative ideas. It is set to release this October, hence the clever Hocus Pocus theme. If this doesn’t want to make you read the book, I don’t know what will!

You can preorder Tyler’s book here! And be sure to check out our exclusive chat with Tyler from SXSW earlier this year!