TV FROM AROUND THE WORLD: "Lo Que La Vida Me Robo" (Mexico) 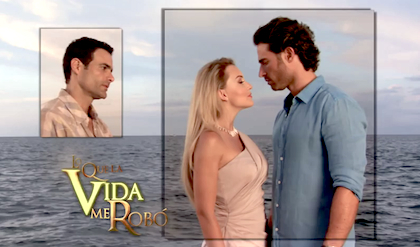 I have always had a deep affinity for novellas. My father watches soccer with the passion of a religious fanatic, and on most Sunday afternoons, he left the TV on either Telemundo or Univision long after the match was over, thus how I was introduced to novellas. Despite the fact that my Spanish is rather minimal, I was entranced by the Spanish soap operas. Between the constant slappings, affairs, pregnancies, deaths, and characters coming back from the dead, I was hooked. Unlike American soap operas, whose cheesy plots are played out with stone-cold seriousness, novellas embrace how over-the-top and utterly insane they are and run with it.

I decided that it was time for me to embrace my novella love once more, so I turned to the most knowledgable group of novella fans that I knew: my 16-year-old students. They were more than thrilled to recommend a number of novellas to me. I decided to watch “Lo que la vida me robo”, which in English translates into “what life took from me.” This Mexican novella is actually a remake of another series entitled “Amor Real”, which premiered in 2003.

I knew that I would love “Lo que la vida me robo” from the opening credits alone. The first few minutes of the show feature a slap, a hunky man riding a cowboy for no apparent reason, and numerous beautiful individuals throwing side-eye at one another. The plot has enough reasons for all of that shade: In lovely Aguazul, a stunning wealthy girl, Montserrat (Angelique Boyer), is controlled by her sinister mother, Graciela (Daniela Castro, clearly having a ball chewing the scenery), who has decided that, in order for the family to keep their wealth, Montserrat must marry her old boyfriend from high school, Sebastian. There is only one caveat to this plan: Montserrat does not love Sebastian; she loves a sweet, lowly commoner by the name of Jose Luis (Luis Roberto Guzman) whom her mother does not approve of and does her best to break them up. Meanwhile, on the other side of town, an everyday ranch hand by the name of Alejandro (Sebastian Rulli, who is most certainly the hottest man alive which People magazine seemed to miss) learns that he is the son of his despicable employer, who promptly dies after telling him. Alejandro does not know how to handle the enormous amount of wealth he inherits from his father, nor is he aware of the other employees who are conspiring against him. Due to a trick of fate, Alejandro meets Montserrat on the beach, and, naturally, falls in love with her.

“Lo que la vida me robó” has a plot that could be as twisted as “Game of Thrones” (Graciela definitely gives off some Cersei vibes while Alejandro reminds me of Jon Snow) as well as all of the wonderful twists of a novella. In the first episode alone, there is a slap, an evil ranch hand trying to seduce his brother’s wife, a dying man who spits and receives insults with his scorned ex-lover, and fabulous dresses and hair. There is also the added bonus of the ridiculously gorgeous Sebastian Rulli, whose stunning face had to have been sculpted by the gods themselves. If that isn’t enough to get you to watch at least the first episode, then I’m not sure what will! And don't worry -- if you're having trouble following the story because you can't understand what they're saying, there is plenty of over-dramatic music to help you along!

Check out Jose Luis catching Montserrat in the sack with Alejandra; idios mio!!!

“Lo que la vida me robo” is currently available for streaming on Netflix.