The 5 Most Terrifying Creatures from "Grimm" (So Far)! 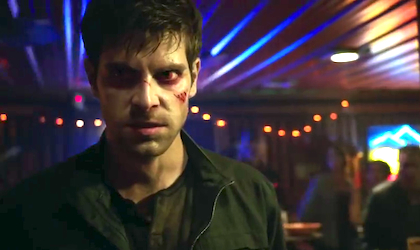 More than your typical police procedural, "Grimm" takes "NCIS" and "CSI", mixes in "Supernatural", and adds a dash of drama similar to "Grey’s Anatomy".

The title gets its name from the main character, Nick Burkhardt, who is a Grimm. A Grimm is a special hunter, if you will, who has the power to see the true from of Wesen. A Wesen is a type of creature or “spirit beast” based from the fairy tales of the Brothers Grimm and different cultures. Nick has certainly faced his share of dastardly and demented foes in the show's 4-season run! Here are just five of the scariest creatures Nick has gone up against... so far!

Gruesome!  I had a hard time watching that episode.

This creature comes from Hispanic folklore as a “boogieman” equivalent, complete with stories encouraging kids to obey their parents or else the “Cucuy” will get them!

Oh man. The Aswang hit near and dear(?) to my heart because I grew up with my grandparents and parents telling me stories of the Aswang. Filipino folklore describes them as vampire-like creatures and are distinguishable by the “Tik-tik” sound that they make.

This Wesen may not seem scary, but it is one of the most deadly. In fact, Nick’s run-in with this creature was the closest he's has gotten to being killed.

The next creature is one of the scariest and unstoppable creatures.

With unstoppable witch/warlock-like powers, it's hard for anyone to match up against a Hexenbiest. Even we don’t know how Nick will fare up against Juliette.

These creatures may seem vicious and incredibly frightening, but they are the least of Nick’s worries. A group called the Royals are proving to be much more threatening than any Wesen Nick will face.

Luckily, Nick doesn’t have to face them alone. He has his homicide partner, Hank, whom he had to reveal his secret to. Monroe, Nick’s Wesen friend, helps him connect with other Wesen so they can understand that, although Nick is a Grimm, he isn’t necessarily the enemy. And then there’s Juliette, Nick’s girlfriend, who may or may not be a help to Nick in the next upcoming season, as she has recently turned into a Hexenbiest.

Don’t forget to catch the season finale of "Grimm" on NBC TONIGHT at 8pm! It is sure to pull out all the stops and guaranteed to give us some crazy cliffhangers!
(Screenshot via YouTube)