TV FROM AROUND THE WORLD: "Derry Girls" (Ireland) 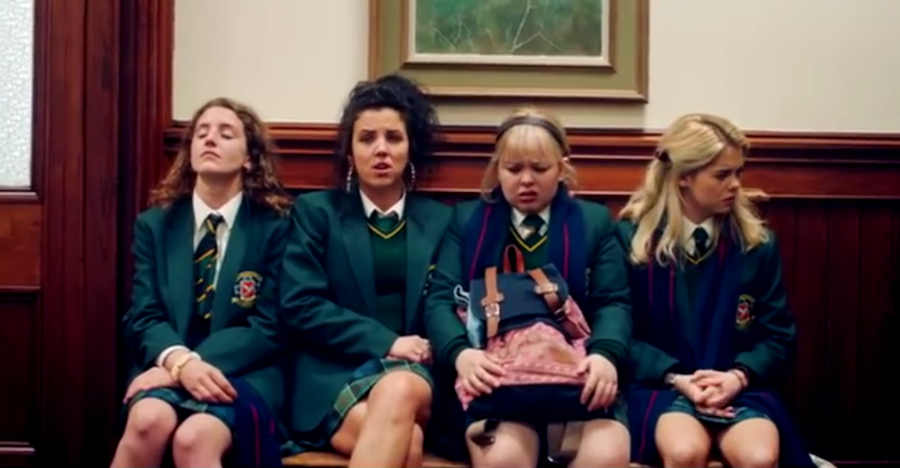 Not-so-hidden on streaming these days is "Derry Girls", which Netflix had been trying to convince me to watch for what feels like a long time before I finally gave in. Well, that day I pressed Play is the day I learned that Netflix knows what I need, and I should stop trying to act like it doesn’t. If "Derry Girls" hasn’t been recommended for you by Netflix, it’s now officially been recommended for you by ME. Go watch it. You’ll like it.

"Derry Girls" is the story of a group of four ragtag, painfully relatable teenage girls living in Northern Ireland. Erin, Orla, Clare, and Michelle, plus Michelle’s cousin James, make up the funniest squad since [insert your fave TV show here]. A loooong Wikipedia page will provide you the backstory of their situation, but here’s the gist of it: During the 1990s, when "Derry Girls" is set, Protestant English loyalists (i.e.: Irish folks who liked being part of Britain) were fighting with Irish Catholic nationalists (i.e.: Irish folks who thought Northern Ireland should be part of independent Ireland) over the status of Northern Ireland. Our girls are of the Irish Catholic persuasion, which is why they all hate Michelle’s cousin, the “wee English fella” James. Despite being set in this tumultuous time period, the show is in no way dreary or dramatic. Well, okay, it is dramatic, but the drama is based on universal teenage situations, like pretending your dog has been resurrected in order to impress a cute priest. You know, the usual.

"Derry Girls" was created and written by Lisa McGee, a former Derry girl herself, and it originally aired on Channel 4, a TV station in the U.K. (the fourth one, I assume). Luckily for us Americans, it arrived on Netflix this December. Immediately after its first episode aired in the U.K., a second season was ordered. That’s good, because the first season is only a torturously short 6 episodes. One word of warning: you might have to put on subtitles. Even though the show is in English, the accents are quite thick and there are phrases I’ve never heard before. And this is coming from someone who did a report on Ireland in 5th grade! I was shocked. In that sense, it’s an educational program, and I will be waiting to call the next small kid I see a “wain”.

And so, for educational purposes, here are the words I learned and tried to translate using only context clue..s.

Wain: A child. It might be the words “wee one” smushed together but that’s just a guess.

Cracker: Great. As in, "Those chips are cracker!"

Grass: Tattle on someone. Rat them out. Spill the beans.

Stall the Ball: Hold up!

A Shower of Bore Bags: kind of self explanatory actually... it means boring people, but I’m definitely going to try to integrate this one into my regular vocabulary.

There’s plenty more sayings for you to find and try to translate on your own!

The sticky situations these characters find themselves in will leave you shocked, delighted, and very much secondhand-embarrassed. Every episode is a journey from bad to worse, as every situation becomes as ridiculous as you’d think possible, and then just a bit more ridiculous beyond that. Even if you went to a Catholic school, you probably never ate a dead nun’s sandwich—at least I hope you didn’t. The characters and the actresses that play them are perfect; funny, unique, and lovable. Even poor Wee English James, who can never catch a break, is a worthy and even likable addition to the squad.

The surroundings that these characters live in won’t be relatable, or possibly even understandable, to most of us Yanks, unless you have some time to spare to read up the centuries-long “Troubles” of Northern Ireland. The presence of armed men on every road, for example, or the school bus being delayed because of a bomb threat, most likely aren't situations we in America have experienced. However, the show balances these extraordinary living conditions with the universal experiences of being a teenager—cramming for a test, going to your crush's DJ set, sitting through a cringe-worthy school talent show, etc. "Derry Girls" will make you laugh, teach you some slang, and leave you wanting more. Give it a wee gander, you won’t regret it!