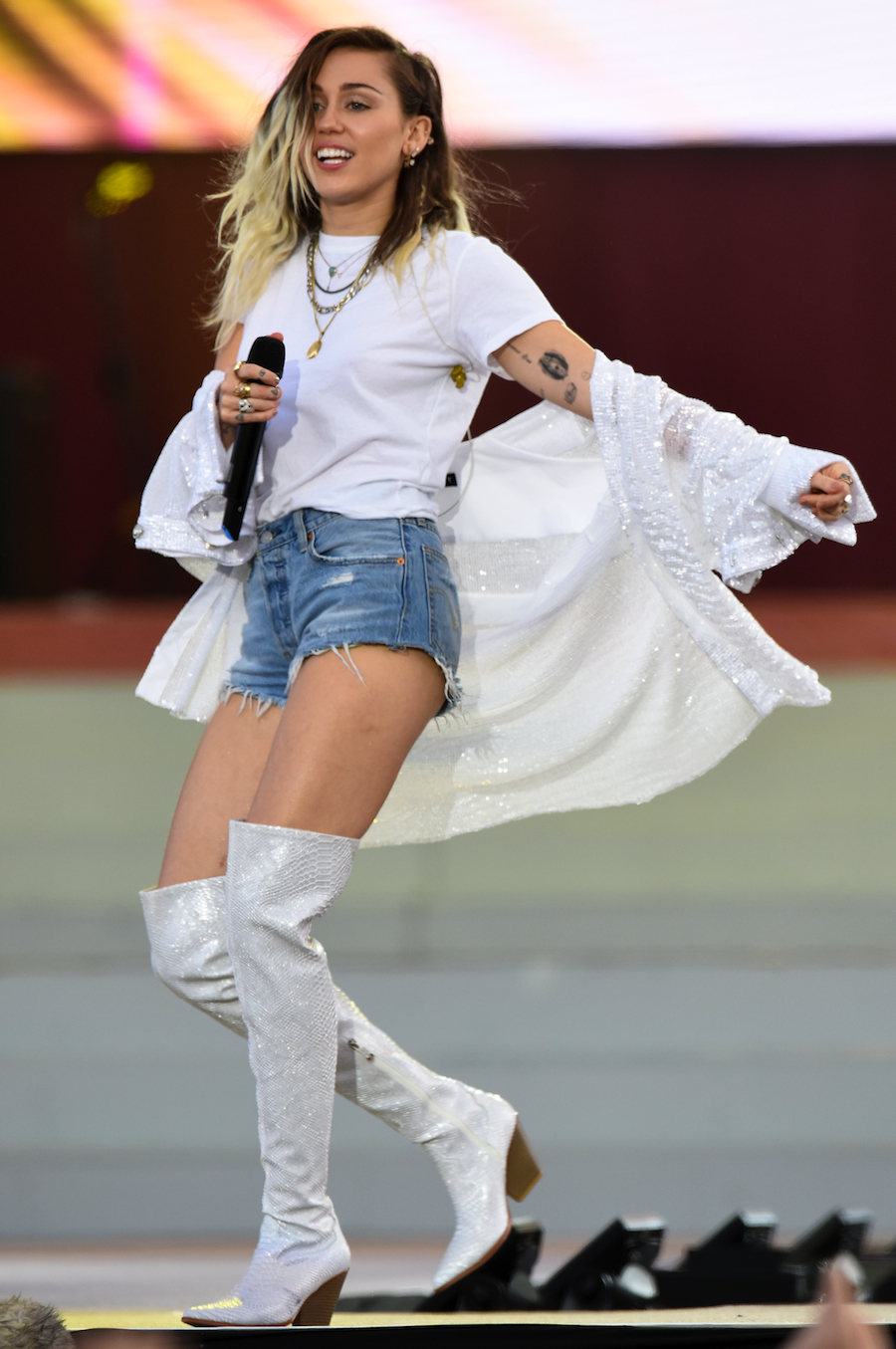 No one stays the same, especially not Miley Cyrus. It’s been a long time coming but it seems that the teen pop sensation-turned-parents worst nightmare has made the biggest turn and revelation of her entire career -- one toward the most iconic and successful time in her career. Younger Now is 11 songs of true pop music goodness and continues to prove why Miley, even 10+ years after her step into the spotlight, is still one of the biggest names in the music biz.

Check out a break down of Younger Now below!

The title track comes in at number one on the track list, and rightfully so. “Younger Now” sets the tone for not only the rest of the album, but for this stage of Miley’s life as a whole. This tune is all about growing up and the inevitability of change. For Miley, we know change to be pretty drastic and pretty frequent. However, in “Younger Now”, she realizes the importance of truly being herself for the sake of her art and well-being. All of you former "Hannah Montana" fans will appreciate the upbeat positivity this HM-esque song portrays. She’s not who she used to be, but this one comes pretty close.

As a long time Miley fan, nothing makes me happier than listening to “Malibu”. Released months ago, this track served as the first single from the album -- the spark that really got the Miley fire going again. This tune is definitely a turning point in the life of the beloved pop star. She changed her sound, changed her style, she publicly rekindled her romance with hottie Liam Hemsworth, and found the most genuine version of herself along the way. “Malibu” is the most fun, romantic summer song you’ll ever hear. What makes it even better? It gave Miley the most iconic come back yet.

Favorite Lyrics: “I never would’ve believed you / If three years ago, you told me / I’d be here writing this song...”

What says returning to your roots like a country-folk duet with your godmother? Miley reels in her “fairy godmother” and country music legend Dolly Parton for this track about eliminating hate in our world. An inspiring track about creating happiness and colorful vibes to make a difference in a rather somber world is typical Miley, but falls short on her list of greatest songs. It’s interesting to hear the magnificent voices of Dolly and Miley in a collab; however, “Rainbowland” is almost a little too folk-sounding for the rest of Younger Now. In any case, listening to what is presumed to be Dolly’s voicemails to Miley about creating the song at the track’s beginning and end is adorable and the cutest and I could listen to it a thousand times over.

Favorite Lyrics: “We are rainbows / Me and you / Of every color, every hue / Let’s shine through / Together we can / Start living in a rainbow land...”

In track four, Miley recalls a relationship that is too good to quit, but equally too hard to maintain. In one verse it’s “if I spent a week without you / I’d probably have so much fun” and the next it’s “I don’t want to wonder what it’s like / To not have you around”. It’s a toss-up deciding what the right move is for her in this pop-country mix she’s got goin’ on. “Week Without You” just screams that Miley has made it home. This number really speaks to what I think she wanted this album to be – influenced by her superstar pop music and infused with a little bit of Nashville twang.

Favorite Lyrics: “It would be so nice not to worry, yeah / How I love not to stress / I’d go and grab my old blue jeans / I’m sick of wearin’ this silly dress...”

“Miss You So Much” is a love song to end all love songs. Even being in the presence of the one she loves isn’t enough. Miley loves deeply and with immense passion in this tune – almost to the point that asks the question of whether it’s cute or slightly overboard. However, this track lands at the top of my personal favorites. Miley’s chops are incomparable... huge and beautiful and precise. This is a prime example of the talent she has. It’s insane and admirable, to say the least.

Favorite Lyrics: “But how can I miss you so much / When you’re right here...”

Miley puts all of her love on the line in “I Would Die for You”. When I heard this song, I ultimately thought of the commonality of the saying “always say what’s on your mind” or “say what you need to say” or “speak up”. They all have the same meaning, and this tune is just another variation of that. How could she never tell someone how much they mean to her? You just can’t live that way, especially when you would die for them. What’s that again about Miley loving extremely deeply?

Favorite Lyrics: “I am yours, and you are mine / I have your heart, I don’t even need a ring / I’d give up all I have in exchange for who I love more than anything...”

We’re past the love songs and into the heated emotions of Younger Now. She doesn’t know where you are, when you’ll be home, what you’re doing, and she has no time for those games anymore. “Thinkin’” is too much for Miley, so much that she’s questioning your honesty and loyalty to the relationship. Something tells me, that is not a situation you want to be in. This track is one of the album’s leading jams. It’s fun, feisty, and all kinds of fierce. Love.

Favorite Lyrics: “We ain’t got nothing if there ain’t no trust / I’m not sure, but I got a hunch / And now you got me thinkin’ way too much...”

If there’s one thing for sure, Miley is in love and it is so obvious in this album. However, it’s also obvious that she’s had her fair share of uneasy circumstances in relationships. In the high-intensity, electric sounds of “Bad Mood”, Miley chronicles her time in a relationship that is all one-sided, one she’s giving so much to and not getting anything out of. Whether it’s friendships, work relationships, or an intimate relationship, I think everyone can relate to this one. You have to know when to say “that’s enough”, when to cut someone off, and Miley gives the best advice on how to feel strong doing so.

Favorite Lyrics: “I always wake up in a bad mood / Open my eyes and I’m on my feet / And I wonder what you would do, yeah / If you couldn’t rely on me...”

Everyone move out of the way, Queen Miley is coming through and she’s searching for a new throne to rule from! “Love Someone” is the ultimate break-up dis track, and let me just say, I would not want to be the subject of this song. It’s unsure who this tune might be about or if it’s just a fictional situation, but the line “be a cold day in hell before I’d ever be your wife” has her fans doing intense investigative work.

Favorite Lyrics: “Taking off my shoes and running towards the sun / I said that nothings really worth it less you’re havin’ fun / To make somebody stay, you gotta love someone...”

Track number ten is a slow bittersweet ballad. I am a Miley/Liam shipper through and through. Since their romantic last kiss on the beach in The Last Song, I’ve been hooked. If you’re like me, Miley and Liam getting back together after their huge public split was one of the most exciting things for you. This song is a sweet love song about, well, not being able to fall in love with anyone other than Liam. The tune is reportedly about Miley’s past relationship with model Stella Maxwell. She wants to love her the way she feels she deserves, but she just can’t let her past love go. I find myself sad for Miley feeling so torn, but overjoyed at the fact that she realizes all of her passion with Liam in this one.

If you are having Disney Channel “Send It On” déjà vu listening to this, you are not alone (too bad there aren’t any Jo Bros or Selena and Demi cameos on this one.) Younger Now has a very politically charged sound to it. Although “Inspired”, a song allegedly written for Hillary Clinton, lands as the last song of the track list, it leads the message Miley wants to get across with the entire album. We know Miley to be very vocal when it comes to her beliefs and what she thinks is right and wrong. “Inspired” doesn’t hold back and strikes a more realistic note than her Dolly Parton track. She puts all of her sadness in our world out on the table and inspires people to feel the greatness they encompass to make a change – the perfect last song.

Favorite Lyrics: “I know that sounds so strange / ‘Cause you’ve always felt so small, but know you aren’t at all / And I hope you feel inspired...”

What do you think of Miley’s new tunes? Check out Younger Now, well, now, wherever you get your music!

(Image via Dave Hogan for One Love Manchester/WENN)