Top Picks From Jxdn’s Debut Album 'Tell Me About Tomorrow'! 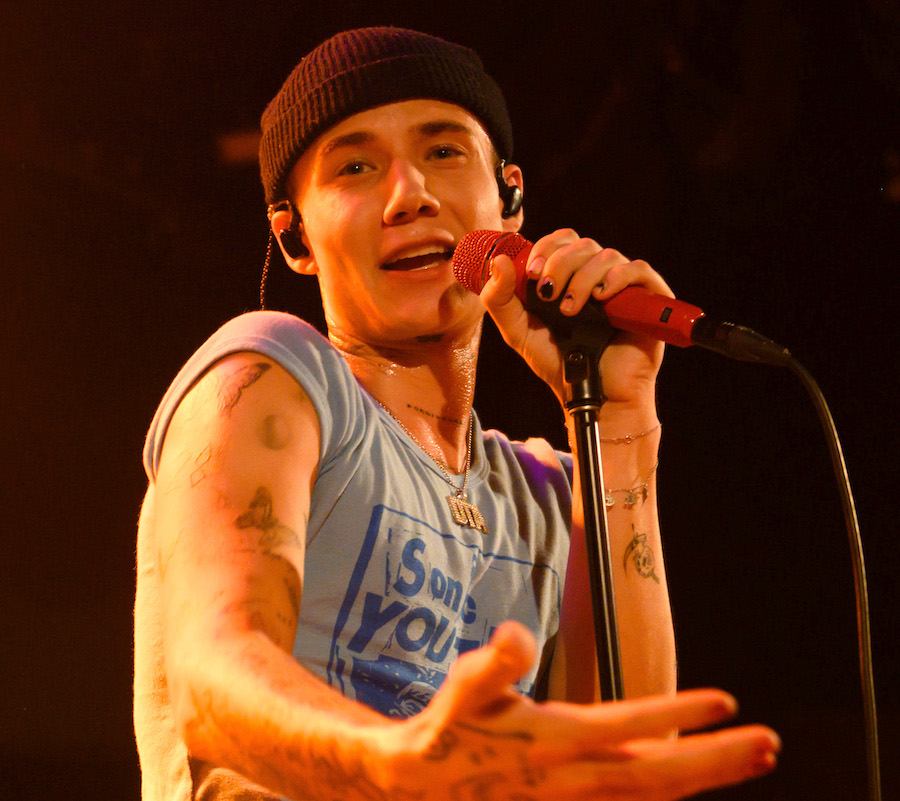 Jaden Hossler released his debut punk-pop album, Tell Me About Tomorrow, on July 2nd and the entire album is yet another sign that the punk-pop sound is back and is not going anywhere anytime soon.

Hossler, who goes by the stage name Jxdn, is signed to DTA Records, and not only will he be opening for Machine Gun Kelly in the Tickets to My Downfall Tour but will soon have his own headlining tour as well!

Hossler started off his social media career as a Tiktoker, part of the Sway House. But, he always knew he wanted to pursue music, and he clearly followed that path-- and with a noteworthy mentor by his side: blink-182's drummer, Travis Barker. Barker's magical touch on Hossler's music complements and guides this young artist's vision perfectly and creates a nostalgic and yet original sound. Here are the tracks that jumped out at us the most!

The single that started it all, "Angels & Demons", needed a Part 2 because Jxdn wanted everyone to know that he is still a rock star. The track starts with a slightly softer sound compared to other tracks on the album, but in the end, the melody drastically switches to a louder and more confident punk rock sound, as Jxdn's lyrics also switch from "I'm fallin' apart" to "I'm still a f**kin' Rockstar". Hossler often talks about Machine Gun Kelly's influence on his music, and specifically in "Angels & Demons Pt. 2", the lyrics and melody resemble "Lonely" from MGK's ‘Tickets to My Downfall’ album. Jxdn sings, "Surrounded by a million / But lonely at heart" in "Angels & Demons Pt. 2", and Machine Gun sings "Lonely, lonely, even when the room is full" in "Lonely".

You know a track is worth a listen when MGK hears it in the studio and decides to become a part of it. "Wanna Be" has an important message with lyrics, "I wanna be okay / I'm sick of the nightmares / I'm sick of the bad days," and it is, without a doubt, a bop. In the music video, Hossler is basically a mini MGK, and the track proves his musical growth as a newbie punk-pop artist.

Favorite Lyrics: "I saw a movie and I wished it was my life / And then I heard a song that I wish I wrote for you"...

Hossler revealed this track to be one of his favorites from the album. It featured a sample of "Feeling This" by blink-182, and Hossler and Barker put a new twist on the track with new lyrics and yet perfectly preserved the timeless sound of blink-182. Jxdn's sample of this 2003 pop-punk anthem once again puts his musical inspirations on the table as he proudly brings back this musical genre, under the guidance of Barker, for a new generation.

Favorite Lyrics: "And now you're gone and I'm here / Another heartbreak and a wasted year..."

"Think About Me" is catchy, fun, completely pop-punk, and one of the standout singles from Tell Me About Tomorrow. It immediately becomes addictive after the first listen and sounds like it could've been the intro track for an early-2000s coming-of-age movie -- a chaotic montage of everyone parking their cars and getting to class on the first day of high school.

Favorite Lyrics: "I've wasted so much time on you / Do you even think about me?"

5. "Tell Me About Tomorrow"

Saving the best for last. This track sums up the entire album's search for hope. Hossler's vulnerable lyrics discuss depression, anxiety, addiction, and heartbreak. And "Tell Me About Tomorrow" provides a sentimental ending to the album with the lyrics, "At night when you feel all alone / I'll tell you about tomorrow". Jxdn revealed that the inspiration behind this particular track was his close friend, Cooper, who has suffered with drug addiction since a very young age. Hossler wanted the title to resemble hope for tomorrow when one feels lost in today. "Tell Me About Tomorrow" proves Hossler's ability to open up about crucial matters through his lyrics and musical narration.

Favorite Lyrics: "Tell me the things that I don't know / I'll tell you about tomorrow..."