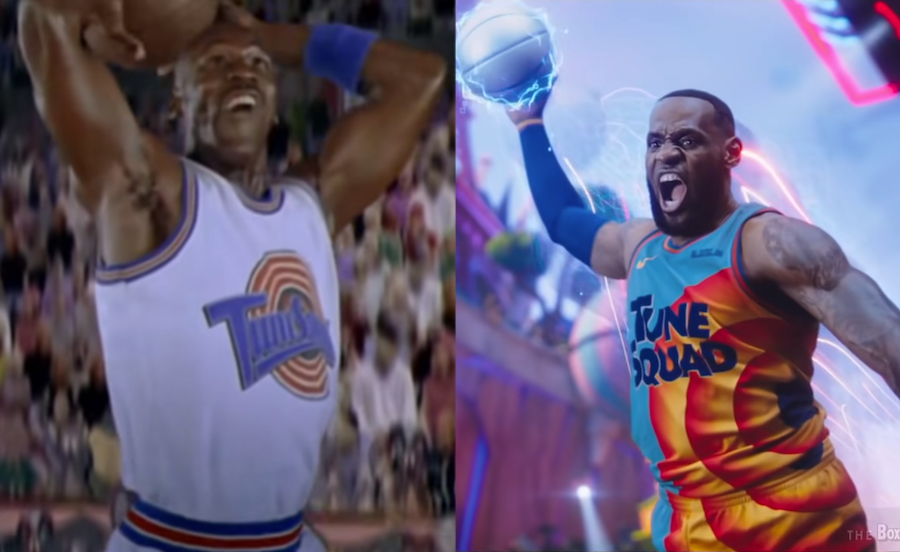 We were recently gifted with the highly-anticipated Space Jam: A New Legacy, and after refreshing my memory of the first Space Jam, I have thoughts. I did not grow up a huge Looney Tunes fan myself, but both movies proved to me that maybe I should belatedly explore the franchise in greater depth. They were super cute, and the generational gap between the two was fascinating to behold, especially in watching the films back-to-back.

For those that don’t know, the OG Space Jam featured Michael Jordan when he retired from basketball for the first time to play baseball, while Space Jam 2 features LeBron James in his current state as a member of the L.A. Lakers. Both movies highlighted these superstars’ careers beautifully, and how they have each put their permanent stamps on the game of basketball – with the help of their larger-than-life brands – as we know it. Both flicks featured other stars from around the league – the MJ iteration also starred Charles Barkley, Shawn Bradley, Patrick Ewing, Larry Johnson, Muggsy Bogues, and even Larry Bird, while the LBJ rendition features a “goon squad” comprised of Anthony Davis, Klay Thompson, Damian Lillard, Diana Taurasi, and Nneka Ogwumike. But perhaps the most fun part of both was the incorporation of the Looney Legends themselves. Seeing these basketball behemoths having to compete with some of the most historically beloved cartoon characters of all time was a hoot and a half, and the silly antics and witty puns abounded from beginning to end of each installment.

As somebody who loves basketball and is the seemingly rare fan of both LeBron James and Michael Jordan, I was thrilled to see both of their talents on full display throughout each movie. There were high (like, REALLY high) flying dunks, sick handles, clutch baskets – everything you’d expect from two of the best to ever lace ‘em up. But it wasn’t just the on-the-court action that had me dazzled; I loved seeing the representation of both players’ off-the-court family lives, and how much their families meant to them. The new version centered around LeBron’s dynamic with his middle child, and how Dom (played by Cedric Joe) had to wrestle with following in his dad’s basketball footsteps while pursuing his passion for game design. I think LeBron is an inspirational dad anyway, and I understand that the movie is fictional, but I thought it was heart-warming regardless. Both Space Jams were full of love and passion and showed young people that, if you put enough effort into something and remain your truest self along the way, you can succeed at even the most seemingly impossible feats. I think kids everywhere can glean important lessons from these films, as Jordan and James in real life have proven themselves to be role models on and off the court (and the screen) time and time again.

Enough of the mushy gushy stuff, though -- let’s get down to the real brass tacks of the matter: the Tunes. Tweety is adorable, Bugs Bunny is a sly son-of-a-gun, Porky Pig is apparently a solid rapper, and Granny reminds me all too much of my own 98-year-old granny. But I gotta say, Daffy Duck and Lola Bunny are probably two of my favorite Tunes now, and I am appreciative that the second movie in particular featured not just these members of the Warner Bros. universe, but basically all the others as well. We got some Harry Potter, a little King Kong, a hint of DC, a dash of "Game of Thrones"... heck, even Jim Carrey’s The Mask made an appearance on the sidelines of the big game. I don’t want to play spoiler, but let’s just say that, in each movie, the Tunes are met with their own challenges that they must overcome with the help of their respective GOATs, and the journey to achieving their goal – whether it is helping the aforementioned stars of the ‘90s get their talent back from the minion Nerdlucks or saving themselves, the universe around them, and the humans in their world from imminent defeat at the hands of the all-powerful A.I. Al-G Rhythm – serves as non-stop fun and high-octane action.

So, which Tune Squad do I think wins out at the end of the day? The MJ vs. LeBron GOAT debate has carried on for decades and I’m sure will continue far beyond when LeBron decides to call it a career, but in terms of each movie specifically, I have to say that the Jordan one probably takes it for me. Don’t get me wrong, I thought the gamer theme of A New Legacy was super interesting and certainly put a modern twist to the franchise in the same way the newer Jumanji movies have, but there is something just classic about the Jordan version that is undeniable. As for the players themselves, I probably think LeBron James is the GOAT over Michael Jordan. Yep, I said it. Okay, I’ll be honest, my mind isn’t completely made up yet. Fine, they’re both equally talented. You happy?! Sheesh.

I’d be a fool, though, if I didn’t shoutout certain supporting members of each cast – Wayne Knight and Bill Murray were hilarious in the original, and Don Cheadle, Ernie Johnson, and Lil Jr and Lil Rel Howery brought the funny (and so many clever sports/pop culture references) in the never edition. These talents certainly helped their respective films leave a mark on the culture of their era, be it the ‘90s or the 2020s, and I think that mark will remain indefinitely. I’m already looking forward to 2046, when the next basketball giant decides to revitalize the franchise yet again with a third chapter to the franchise. Hey, wouldn’t it be cool if that person was a woman?! Just a thought, Warner Bros.

I’m always a sucker for a good sports film, and Space Jam and Space Jam: A New Legacy were no exceptions. Both movies were genuinely enjoyable, and although I think the Michael Jordan version edges out the LeBron James one, the sweet familial storyline in LBJ’s was a joy to witness. All we need now is a time machine to see prime Jordan and prime James match up with each other for the one-on-one to end all one-on-ones. Talk about must-see TV. But in the meantime, if you’re a parent reading this, definitely make an evening of checking out A New Legacy with your kids. They’ll gain exposure to some classic cartoon characters and get a kick out of the zaniness along the way. And hey, maybe they’ll want to be tech-savvy hoopers themselves when they grow up. Nothing looney about that, I say!