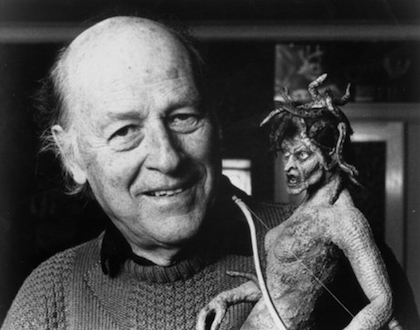 This week, the world lost one of the great dream-makers. When he was 13 years old, a young boy named Ray Harryhausen saw the original King Kong when it debuted in theaters back in 1933. His life was changed, and, as a result, he would go on to change the film industry forever. Here’s a scene from the film that altered Harryhausen’s course:

The main technique that Harryhausen was most notably known for was the same one Willis O’Brien used for King Kong: stop-motion photography. After years of working on short films and training films for the army, Harryhausen finally got his big break when he was asked to do the effects for The Beast from 20,000 Fathoms. The movie tells the story of a terrifying and quite large dinosaur that was awakened from its slumber at the bottom of the ocean. The dinosaur makes its way to New York City, and mayhem ensues. Here’s a clip featuring the Beast (and perhaps the dumbest cop whoever lived):

Ray Harryhausen continued to perfect his craft over the years, and as such we got great movies like The 7th Voyage of Sinbad,The Three Worlds of Gulliver, and Jason and the Argonauts. But perhaps his greatest triumph was the final film that he created special effects for: the original 1981 Clash of the Titans. This movie is an epic saga that brings the myth of Perseus to life and showcases his daring battles with the likes of Medusa and the Kraken. This film, and many of the others he did, inspired a whole new generation of filmmakers and special effects artists. George Lucas, James Cameron, and the late Stan Winston are just a few of the people that were inspired by Harryhausen’s hard work and genius.

Some might argue that Harryhausen’s effects look dated and that the CGI effects of today are a much easier pill to swallow, but I respectfully disagree. There is an organic quality to Harryhausen’s work that I believe has stood the test of time. Perhaps it’s because his creations were made out of real materials and were not just a collection of ones and zeros. For me, personally, when I see a Harryhausen effect, I think about all the hard work and effort that went into creating it. The awe and respect that I have for the effect then blends in with my overall enjoyment of the scene and the film as a whole. Now, I don’t want to entirely bash the modern-day computer effects that we have today. A film likeAvatar, while not the greatest story ever told, proved just how amazing CGI effects can be when time and effort are put into them. We’re still pushing the boundaries of moviemaking magic, and new techniques and tricks are being developed everyday. Well, for my money, that’s largely due to the creative genius and legacy of Ray Harryhausen.

Thank you for all the magic Mr. Harryhausen. You’ll be missed.