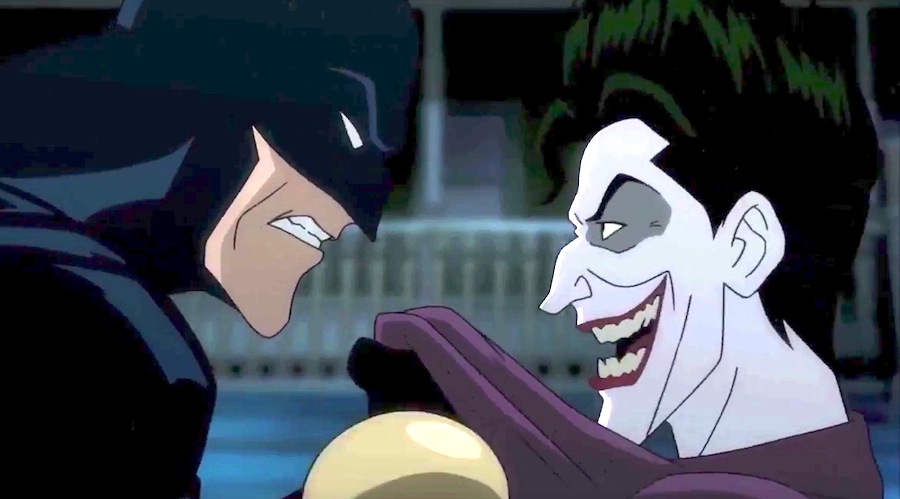 If there’s one thing animator Bruce Timm knows, it’s Batman. Known as the co-creator of the much-beloved “Batman: The Animated Series”, Timm has set the modern mold for much of DC’s animated universe. What he’s got in store for us next looks to be pretty great too.

It was reported some time ago that Timm and his team would be tackling the challenge of adapting the revered graphic novel The Killing Joke by Alan Moore into a movie. He was to bring back a lot of his favorite “Batman: TAS” voice actors like Kevin Conroy as Batman and Mark “I Won’t Voice The Joker Again Unless You MakeThe Killing Joke” Hamill. I like The Dark Knight trilogy as much as most, but to me, Batman and The Joker will always be Conroy and Hamill, so this is immediately a great and promising treat.

The Killing Joke is an important part of Batman canon. It influenced many works, including The Dark Knight. It also made The Joker into more of the frightful psychotic character we know today. There was a time when The Joker was literally a joke, and this graphic novel was pretty much the big comeback he always wanted. He does some really sick things, and even what Batman gets wrapped up into doesn’t seem like something normal superheroes would. Before we get into anything more, let’s check out the newly-released trailer!

Right off the bat (HAR HAR), you can detect a major design difference if you’re a fan of the graphic novel. Timm and some other animators have spoken about that and how The Killing Joke artist Brian Bolland’s drawings for the comic were too detailed to be replicated. Even if they had the same talent as Bolland, it wouldn’t work for an animated feature, as animation is normally a more stripped-down art. In my opinion, however, this movie looks great!

(WARNING: Possible spoilers ahead if you have not read The Killing Joke!)

Let’s get into the actual content of the story. The Killing Joke follows Batman as he looks to capture The Joker once and for all after he paralyses Barbara Gordon (AKA: Batgirl) and kidnaps/tortures a naked Commissioner Gordon. Both sides of light and dark seem to be playing for keeps in this one. On screen in the trailer, we can see that the visuals pretty much line up with what Gordon goes through. He is bitten and beaten by some odd-looking baby creatures and goes through a tunnel ride that flashes pictures of the beating his daughter undergoes. Much like how a lot of the comic is open to interpretation, it is never discussed yet at times looks a lot like The Joker may have raped Barbara Gordon. Due to delicate issues like this, it is not sure if the movie will be get a PG-13 or R rating.

The setting inside an amusement park is big for this one, so it’s great they kept it. As mentioned before, there’s that scene with the ride, which is one of the most dark and brutal things ever shown in a Batman comic before. It’s also cool because The Joker doesn’t use a normal myriad of hapless henchmen; instead he uses carnie folk! Just seems more fitting for the Clown Prince of Crime.

In another timeline, we see for the first time The Joker’s origin story… Well, sort of. The Joker starts off his origin story by telling the audience, “Sometimes I remember it one way, sometimes another ... If I'm going to have a past, I prefer it to be multiple choice!” This establishes right away that he is not a reliable narrator by any means. What does this mean for an origin story? Well, it could be that what he tells us is all true, all false, or parts of it are true. It is not certain from the trailer if they are going this route of guessing if it’s true, but we do see clips of The Joker as a struggling stand-up getting involved with the wrong people before his chemical accident that makes his face clownish, and we see the red helmet he wears when he was originally the villain Red Hood right before the previously-mentioned accident. Just like in the comic, we can see a clip of him struggling to get the helmet off; it wasn’t the easiest thing to breath in. We also see the iconic shot at the end of the trailer of The Joker laughing hysterically over the chemical accident he was just in, thus showing The Joker’s birth in one long psychotic laugh.

The main story behind The Killing Joke that is definitely mentioned in the trailer is the fact that Batman and The Joker are much alike, and The Joker knows it. The common theme between them, of each having “one bad day” that set them down their opposite yet equally dark paths for the rest of their lives, is what links them. That’s The Joker’s main goal in The Killing Joke -- he wants Batman to know they are one in the same. This is shown in the trailer when Bruce says, “All these years, I don’t know who he is any more than he knows who I am.” To which Alfred retorts, “Are you sure of that?” They both know exactly who each other are, whether Bruce realizes it or not. They may not know each other’s identity but by the insanity they both spiraled down from each of their separate “one bad day”.

Something that is not at all in the graphic novel but will be in the movie that I’m excited for is a prologue of how The Joker originally took Barbara as Batgirl. I don’t know if we will see specifically what he did to her, but it’ll be cool to see her in action and what she did to really set him off, if anything at all. Timm put it best when said that it would also make her more likable to the audience and give a reason to care what has happened to her. Since, like the graphic novel, this movie will be a stand-alone, it needs to be treated as though the audience doesn’t really know who Batgirl is. It also makes sense to do it that way since she and Robin have been notably absent from all of the latest Batman incarnations.

The Killing Joke is a favorite dark story of many others and mine. Never before has it been put out on screen aside from how it influenced Heath Ledger in his iconic performance in The Dark Knight and it’s heavy influence over the Arkham Knight video game series. (Ever wonder why Barbara Gordon is in a wheelchair and has her codename Oracle? Aside from Arkham Origins, the whole series takes place after The Killing Joke and is set in the same Batman universe.)

All I can say about this coming out is that… It’s about BAT-time! Geez, it’s only older than myself and a lot of other Batman fans, so thank you, Bruce Timm, for finally getting the ball rolling on that. Yes, we do have to wait for Summer of this year, but we’re already in Spring, although I feel like it would’ve been great if it got released the other day on April Fool’s day.

Want to see some more cool stuff on the upcoming animated version of The Killing Joke? Check out this pretty sweet 10-minute behind-the-scenes video featuring Bruce Timm, his animators, and the voice actors: