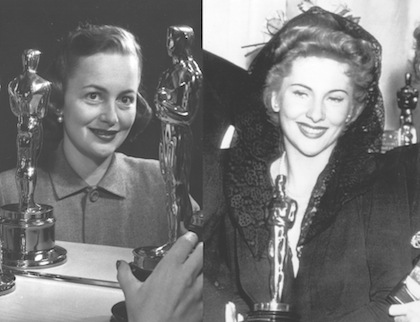 It’s a sad fact of Hollywood that stars eventually grow old and, eventually, pass on, leaving their legacies behind on celluloid which gradually grow dusty and forgotten as new generations of stars rise through the ranks until, at some point, when you mention one of these bygone actor’s names, you are met with blank stares and a quizzical, “Who?”

I’m sure I would get that very reaction from the average YH reader if I mention the names Joan Fontaine and Olivia De Havilland. Some of you, however, might be more familiar with the latter, if you’ve ever sat through all 10 hours of Gone With The Wind… Joan and Olivia were sisters and actresses during Hollywood’s Golden Age, both getting their starts in the 1930s and becoming huge stars in their own rights, performing for the hottest directors of the day, starring opposite the sexiest leading men, and even winning some Oscars. All while maintaining one of the most notorious and longest-lasting family feuds in Hollywood history. The best part? THEY ARE BOTH STILL ALIVE!

Joan Fontaine, the younger sister, turns 95 years old today. Her sis Olivia was born a year earlier. De Havilland is the family name, but Joan changed hers at their own mother’s request (yikes!) when she decided to follow Olivia’s footsteps onto stage and screen. In the early days of their acting careers, Olivia seemed to have the upper hand, winning plum roles, including the aforementioned Gone With The Wind, while Joan struggled with bit parts and contract issues with her studio. However, she swiftly caught up with Olivia in the early-‘40s when she landed the coveted lead role in Alfred Hitchcock’s Rebecca. This, in turn, led to Oscar nomination for Joan… who would find herself competing against her own sister for the golden prize!

Joan won. And she totally blew off Olivia as she walked by to accept the statuette. Oh SNAP.

Although displaying an ample amount of pride over her sister’s big victory for the press, Olivia was none too happy that her upstart little sister was not only starting to overshadow her but seemingly rub her nose in it. But she was soon to get her revenge… twofold. Olivia won her first Oscar in 1946 and then another one in 1949! And both times, she too brushed off Joan’s attempts at congratulations. Burn!

But it wasn’t just their careers where they competed. They also butted heads over their mother’s attention (who, apparently, favored Olivia) and traded public barbs about each other’s husbands (oh no she didn’t!!). But relations broke down for good in the 1970s when, according to Joan, Olivia neglected to invite her sister to their mother’s memorial service. It was the final straw, and the sisters have never spoken to each other since. They won’t even speak about each other either; when Olivia, who now lives in France, was interviewed only a few years ago and asked about her sister, she smiled and politely declined to comment.

Olivia De Havilland and Joan Fontaine are two of the last stars of that Golden Age of Tinseltown who are still alive and kicking. Both well into their 90s, they, by all accounts, don’t appear to be casting off any time soon either. And is it any wonder? These two ladies have been feuding for so long, it now looks as if they are competing against each other to see who can outlive the other!