The Best Fashion Moments From The Harry Styles Love On Tour (So Far)! 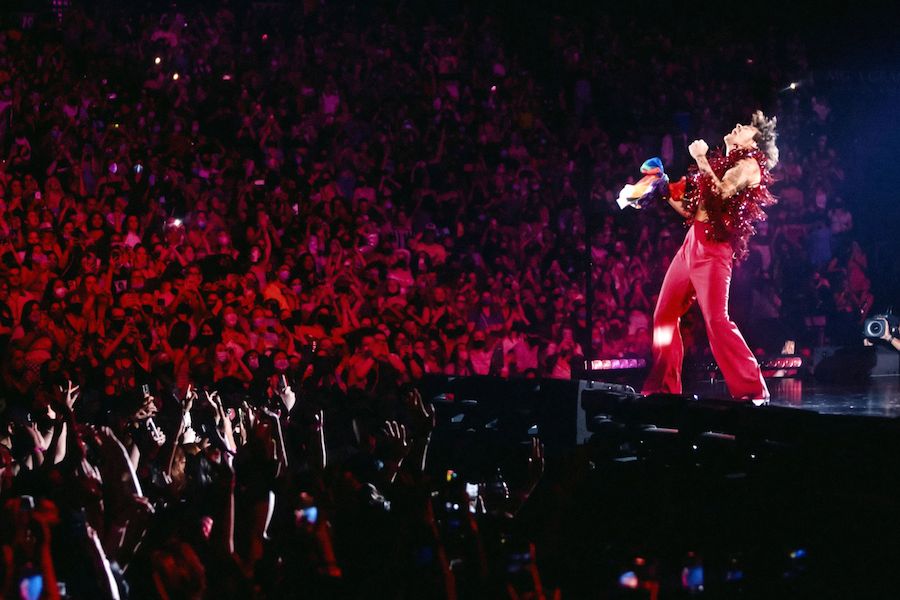 In a return to post-COVID normalcy, previously scheduled concerts, shows, and events are picking back up -- one of the most anticipated being Harry Styles's Love On Tour. Although the over-a-year-long wait for fans was agonizing, the postponement gave everyone extra time to craft some of the best concert outfits we’ve ever seen. Forget the Met Gala -- Harry Styles’s concerts are a whole fashion event in their own right. The second go-around for the U.S. leg of the tour has officially kicked off in Las Vegas at the MGM Grand, where we’ve seen the beginning of some of the most amazing looks Harries are giving for HSLOT.

I LOVE WOMEN EVERYONE LOOKED THEIR ABSOLUTE BEST!!!! #loveontour#harrystyles#concertoutfit#harryoutfits

Let’s start with the king himself. Harry kicked off his post-pandemic opening show in a custom Gucci ensemble consisting of bright magenta high-waisted pants, a matching tinsel-esque open vest, beige boots, and not a shirt in sight. I think it’s safe to say that Harry Styles invented shirtlessness.

While Harry has clearly made fashion a top priority for himself at his shows, fans followed suit -- literally. Variations of pantsuits are a staple in every die-hard Harry’s wardrobe, ranging from sleek to full-out groovy. TikTok user @hope_reeves47 went for a white monochromatic look, whereas user @ysoriano94 opted for a sparkly pink suit and tour tee underneath. Simply put, Pantsuit Harries understood the assignment.

#stitch with @saradifed #greenscreen OMG ?? NOT ME TELLING EVERYONE I GOT IT AT THE FLEA MARKET BUT MY MOM SAW IT AND LOVED IT ❤️#hslotvegas

Harry ignited a feather boa craze after finishing off his 2021 Grammys look with a thin pink feather boa, and fans took note. Insta users @bianca_capanna and @bekah_winkler added spice to their outfits by accessorizing with color-coordinating boas, respectively.

It’s official -- Harry Styles fans are simply the most beautiful people on this planet. We can’t wait to see what else Harries (and Harry himself!) have in store for the rest of HSLOT and to watch as Harry’s concerts turn more into a runway show. If y’all keep it up, you’ll be outdoing Harry at his own shows, but we all know he’d love it.