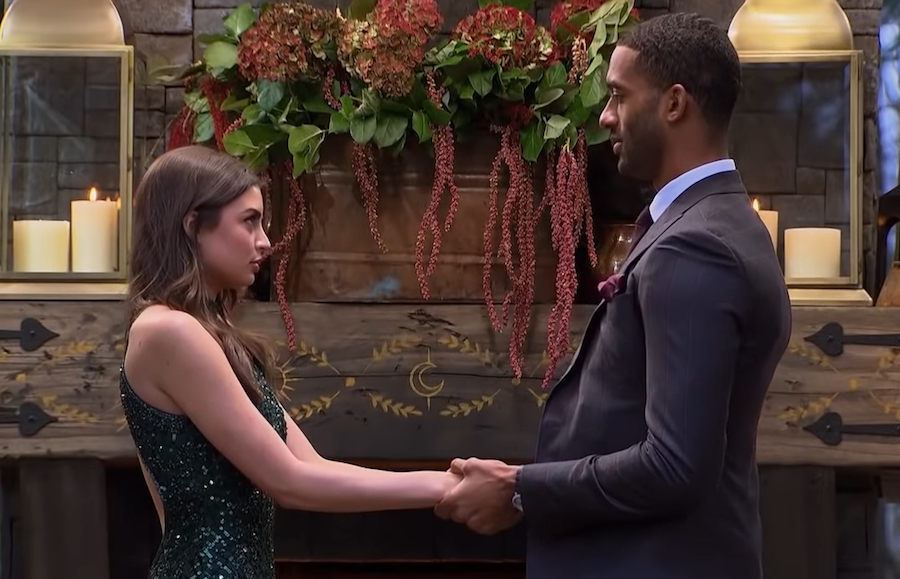 It’s officially time! Last night (March 15, 2021) saw our Bachelor, Matt James, wrap up his journey towards true love in the much-anticipated season finale. With just the top two contenders, Michelle and Rachael, remaining, Matt has a tough decision to make on who he will choose as his future wife (or not...spoiler alert!).

Let's break down all the drama!

Matt’s mom, Patty, and older brother, John, pay a visit to the Pennsylvanian resort to meet the two ladies that could potentially become a part of the family. Both women are grilled by John about their respective relationship histories and both assure Patty that they are very much in love with her son. Rachael bonds with Patty about the religious faith that she and Matt share and how she knew early on that this is where she was meant to be, and Michelle is excited to make Matt a part of her close-knit family.

The three members of the James clan then sit down to debrief over Matt’s feelings and the two women he is dating, which is where things really take a turn. Although Patty likes both Michelle and Rachael for her son, she is worried about him rushing into an engagement too soon, especially given how her marriage ended badly when things were rushed. She makes Matt realize that there are many things he should consider before marriage, besides just love. “There's nothing like being in love… but love is not the end-all, be-all”, she says.

Before Matt has to make his life-changing decision, he gets one more date with each of the two women. Michelle is up first, and, as if we hadn’t seen every possible adventure sport-themed date already, the two have to make it to a romantic outdoor couch by rappelling down the side of a building. They make it down safely and have a conversation on the aforementioned couch, where Matt dodges Michelle’s questions about where he stands emotionally, given that he is secretly having a major internal conflict. Later that night, he shows up at Michelle's door for another chat, where she gifts him jerseys labeled Mr. and Mrs. James. However, this custom gift ends up being a waste of money, as Matt then reveals to her that he is not ready for an engagement with her, and doesn’t see himself being ready anytime in the future. As Matt sees himself out, both are clearly heartbroken with tears streaming down their faces.

It seems like Matt has really taken his mother’s words to heart, and he doesn’t know if he can get engaged to EITHER of the women at the end of the week. Host and “Bachelor” franchise relationship expert Chris Harrison makes a few appearances to comfort Matt and ask him what his plans are, now that he has doubts about any sort of engagement. Matt says that he is not looking to make the easy decision, which is to propose just for the sake of the show, if he does not feel ready. He simply asks Chris for more time to think.

Nevertheless, official “Bachelor” jeweler, Neil Lane, shows up to Matt’s place with a briefcase to help him pick out a ring. Matt makes his choice with a heavy heart and states that the ring symbolizes “what [his] father couldn't give to [his] mother.” He is still unsure if the ring will even make it onto someone’s finger at the end of the process.

Rachael is spiralling with doubt. After her last date with Matt is cancelled, due to him needing time to think about what he wants, she feels blindsided and unsure about their relationship. She finally gets an invitation to meet him at the lake for some “answers” and (although the date card did not specify a dress code) gets decked up in a cocktail dress to head to the Proposal Altar. As Matt stands in front of her with a secret ring in his pocket, she gives her speech first, stating that, when he is hurting, she is hurting. Matt then responds by saying that he can’t propose to her, because he is still unsure about a long-term commitment, but he wants to continue to date her to see what their future may hold. Rachael realizes she “won”, and the two ride off happily in a horse-drawn carriage. The End!

In the hour-long “After The Final Rose” special airing after the season finale, we learn more about where Matt and Rachael currently stand, especially given the controversy surrounding the racist and offensive images that have resurfaced from her past. With host Emmanuel Acho stepping in for Chris Harrison after his controversial response to Rachael's past led him to temporarily distance himself from the franchise, we hear from Matt, Rachael, and even Michelle on where their off-screen journey has led them since the proposal day.

Michelle arrives looking for closure, saying that she was denied a conversation with Matt after his emotional break-up with her. Matt apologizes for the way things ended and they both wish each other happiness and lots of kissing with eyes closed. She also addresses the franchise and Rachael’s handling of the racial insensitivity, stating that “Rachael has a good heart… but I think there's a lot of learning [to do].”

Matt then talks about the pressure he faced being the first Black Bachelor in the series’ nearly 20-year history, emphasizing that he doesn’t regret his decision to come on, as he learned a lot about himself in the process. And although his honeymoon phase with Rachael was fun while it lasted, he began to question everything when the controversy surrounding her past came to light. He then took “a step back” from their relationship when he realized that she may not understand “what it means to be Black in America,” and what it would mean for their children.

Rachael finally comes on stage and addresses the issues herself, saying that she was living in ignorance and “in [her] eyes, there's no excuse.” She also talks about what she has learned from her mistakes, saying “I don't think that anything is going to change if we don't take actions to put that education into play.” Matt and Rachael then talk for the first time since their break-up, where she makes sly attempts to reconcile with him and tells him that she cannot see herself feeling that way for anyone else. The two remain broken up, though, and, 11 weeks and 37 women later, it seems like Matt James is still single.

There it is, “Bachelor” fans! Season 25 ended quite anticlimactically with no happy ending. But maybe we will have better luck on the upcoming “Bachelorette” seasons, as our very own Katie and Michelle were announced as the next two Bachelorettes!