The Most Stunning Looks at the 2021 Grammys! 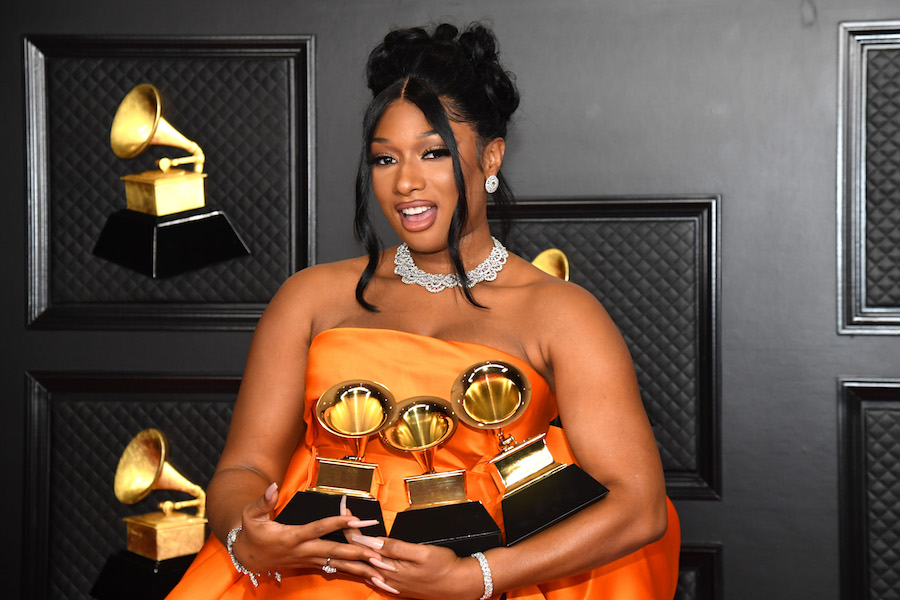 Ah yes, the grace and majesty of Awards Season brings us even more celebs in designer looks that we just can’t get enough of. While there wasn’t the usual celebrity turnout due to COVID’s limited capacity, there were still stellar performances and fantastic looks – Blue Ivy Carter even brought home a Grammy for Best Music Video for "BROWN SKIN GIRL"! Here are some of our favorite looks from last night’s show that had us singing their praises.

Megan Thee Stallion was nominated for 4 Grammy Awards last night – and won 3 of them! She took home Best New Artist as well as Best Rap Performance and Best Rap Song for her hit "Savage", and she looked amazing doing it! This beautiful shade of her orange Dolce Gabbana dress looked stunning and she was decked out in diamonds – rightfully so for a 3-time Grammy winner.

One of our favorite pop and fashions icons, Dua Lipa took home one out of her whopping 6 Grammy nominations this year, and her glittery Versace dress just screams space-pop icon. The girly retro/galaxy vibes of her album, Future Nostalgia – which won Best Pop Vocal Album -- gave us a little bit of Y2K, and a lot of the Dua Lipa spice we’ve come to know and love.

It wasChika (Chikalogy)’s first Grammy ceremony and she was nominated for Best New Artist, and her look is absolutely iconic. It’s everything that we love about the 2020-21 fashion trends all rolled up into one, casually glamourous look. The pastels, the purple, the Nike sweatsuit, chunky jewelry, and statement mask? We can’t wait to see her back next year.

4. Lizzo
Lizzo had not one, but two iconic dresses for the Grammys this year, but perhaps her most notable photo from the night was her congratulating her friend Harry Styles on his Best Pop Solo Performance win. Both dresses were sparkly, shimmering, and gave us different fonts of the same fun, summery-mermaid aesthetic. Though not nominated this year, she took home 3 of her 8 nominations last year, so it was sweet of her to spread the love to her fellow artists last night.

We have come to know that Harry Styles never disappoints – and usually rocks Gucci to most award shows and events he attends. Last night, he wore a yellow plaid suit with matching mask and pink sweater vest underneath with a larger pattern. But the best part of it all? The purple feather boa he donned to the awards (and that he kept it going with a lime green one for his ‘Watermelon Sugar’ performance later on).

After her 4-year hiatus from the Grammys, Taylor Swift made her triumphant return as the queen of all seasons – and the winner of Album of the Year last night. With five total nominations and her range of talent spanning across genres, we can’t say we’re surprised. She looked like Spring itself last night in her floral Oscar de la Renta mini dress and matching mask – we love to see it.

Every year, stars get bolder in their music and their fashion choices, and award shows are a great way for designers to showcase their creativity on some of the most talented, award-winning celebrities taking home some of the biggest awards in music. Which was your favorite?