The 7 Most Inspiring Moments from the 2015 Academy Awards! 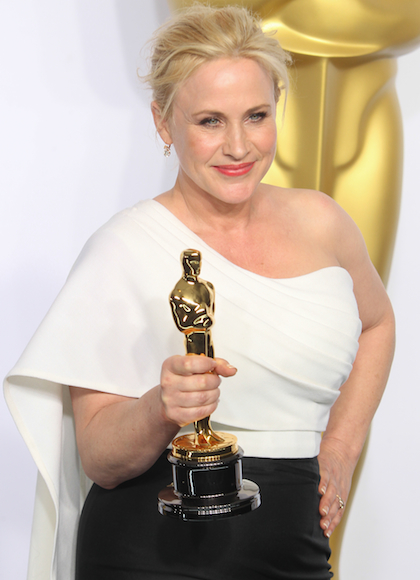 The Academy Awards is one of the most-watched televised events in the world. When you find yourself on a platform of that scale, what you say and do will have a mass impact – so think wisely about how you want to use that platform!

At this year’s Oscars, several of the night’s winners realized the potential outreach that was at their disposal and took advantage of the opportunity to get the word out about a variety of important social issues, from racial equality, gender equality, suicide, ALS, Alzheimer’s Disease, and more.

So, here are the most inspiring, badass moments from last night’s Academy Awards!

The Best Supporting Actress winner was perhaps the most unabashedly outspoken the entire night. For starters, she made a point of telling red carpet interviewers that she had no time to get a manicure that morning because she was too busy working with her Give Love charity, thank you very much. It was a great addition to the #AskHerMore campaign started on Twitter, aimed at getting the media to focus on more than the female nominees’ designer gowns and expensive jewels. But Patty’s crowning moment came when she actually won her Oscar and she used her moment to give a rousing speech advocating gender equality that was so badass that it brought Meryl Streep and J.Lo to their feet! #Arquette4Prez, y’all.

The Best Actor nominee’s advocacy was a bit more subtle but pretty cool nonetheless. He chose to sport a pair of #HeForShe cufflinks in support of Emma Watson’s gender equality campaign. Now that’s an accessory worth talking about!

When the young scribe took the stage to accept his Best Adapted Screenplay Oscar for The Imitation Game, he bravely aired his own demons, confessing that he once attempted suicide because he felt like an outsider. He then addressed all the other kids out there who might feel the same way and encouraged them to “stay weird” and “stay different” and, if they should ever find themselves in the same position of himself one day, to spread the same message in turn. Amen!

Here is a man who has been in the biz for, like, a hundred years, always in second banana character roles and never a household name FINALLY getting his due and being recognized as the Best Supporting Actor this year for his performance in Whiplash, and what does he do? He gets up on stage and pays tribute to his family and encourages everyone watching to call their mothers. Class. Act.

It wasn’t so much his speech when he won Best Actor for his role in The Theory of Everything; it was his reaction. In a display of uninhibited giddiness, Eddie didn’t even try to pretend he wasn’t out of mind with excitement… which, let’s face it, is precisely how you should react when you win a freaking Oscar!

The documentary filmmaker, who won the Best Documentary, Short Subject Oscar for “Crisis Hotline: Veterans Press 1”, also brought up the serious issue of suicide and encouraged people to have an open dialogue about it. The house band had begun to play her off, but once she brought this up, they stopped. For the first time ever, someone managed to cut off the cut-off music!!!

“Glory” indeed! There was not a dry eye in the house when the two artists took the stage to perform their nominated original song “Glory” from the film Selma. The rousing vocals combined with the powerful visuals meant to pay homage to Martin Luthur King Jr’s famous march brought the house down and star David Oyelowo to tears. And we don’t blame him! They capped off this moving performance by actually taking home the Oscar and accompanying it with yet another inspiring speech dealing with racial equality. Profound stuff, you guys.

What was YOUR favorite moment from last night’s Oscars?