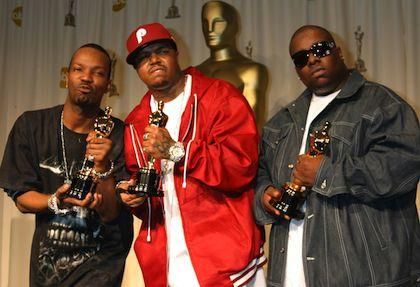 Chew on this statement for a moment: “Eminem has an Oscar.”

Ever since Isaac Hayes strolled up to the podium in 1972 to except his Academy Award for “Theme from Shaft”, Oscar voters have made a habit of stepping out of their comfort zone when it comes to picking the annual Best Original Song.

Films that most people wouldn’t typically associate with “Oscar glory” – films like Top Gun, Working Girl, Dirty Dancing, Dick Tracy, Flashdance, and, of course, Shaft and 8 Mile – can all claim to be Academy Award winners thanks to the amazing music attached to it. It’s arguably in this category where the most fun on Oscar Night can be had. Let's face it, it doesn't get more surreal than watching Three 6 Mafia accepting the same award won by folks like Laurence Olivier and Meryl Streep (above).

- In the last 20 years, Disney and animated films have been a literal gold mine when it comes to winning this category. Champs include The Little Mermaid, Beauty & the Beast, Aladdin, The Lion King, Pocahontas, The Lion King, Prince of Egypt, Tarzan, and Monsters, Inc.

- Disaster movies are also a good source of Oscar winning songs. The Poseidon Adventure, The Towering Inferno, and Titanic all produced blockbuster tunes.

- Madonna can boast of having sung two Best Original Song winners (from Dick Tracy and Evita).

- In 2007, Melissa Etheridge’s “I Need to Wake Up”, from An Inconvenient Truth, was the first (and, so far, only) song from a documentary film to win. Not only that, this song best out three selections from Dream Girls to take the top prize!

- This year’s nominees include tunes from The Lego Movie, Selma, Beyond the Lights, Glen Campbell: I'll Be Me, and Begin Again... If you'll notice, only one of those films is actually nominated in any other category!

In honor of the 87th Annual Academy Awards tonight, this week I am presenting a cornucopia of some of the most memorable, notable, and just plain wacky Best Original Song winners from years past. Enjoy!

Performed by Carly Simon (a personal fave - '80s cheesiness at its best!):