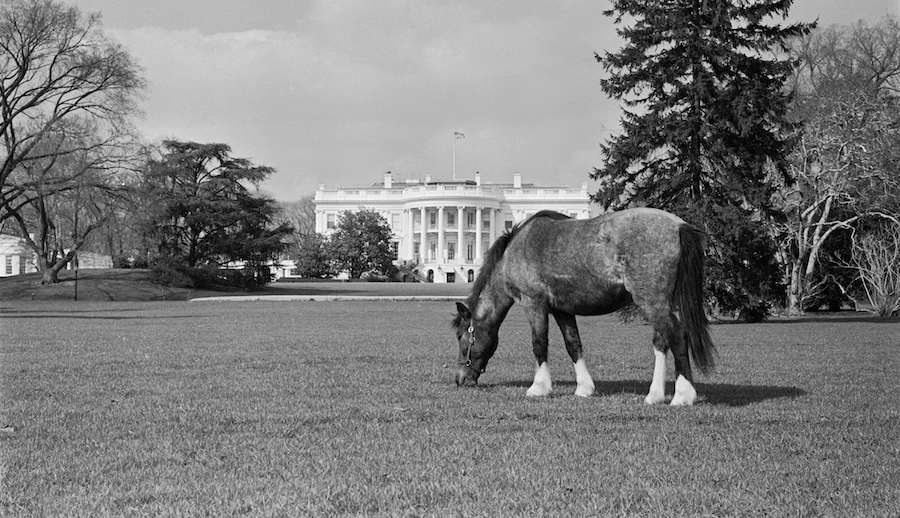 The First Cat has finally arrived at 1600 Pennsylvania Avenue! Meet Willow, a gray cat that has joined the Biden family at the White House. Named after Jill Biden’s hometown (Willow Grove, PA), the cat was picked up by Dr. Biden, who first noticed the farm cat in rural Pennsylvania where she was campaigning for her husband. “Willow made quite an impression on Dr. Biden in 2020 when she jumped up on the stage and interrupted her remarks during a campaign stop,” said Michael LaRosa, the First Lady’s spokesman.

While Willow has been a purrfect new addition to the Biden family, she is far from the first cat to grace the White House halls. In fact, there have been a series of other, even stranger animals that have made their home in D.C. Here are a few of our favorites!

Okay, don’t tell PETA, but back in 1825, when French revolutionary hero Marquis Lafayette visited the White House, he had a very non-traditional gift for President John Quincy Adams: a freaking alligator. Instead of turning down the gift like a normal president would (do those even exist?), Adams decided to keep the reptile, putting it in a bathtub in the East Room of the White House. White House legends say that Adams would freak out visitors with his pet when giving them a tour of the estate.

As I said, many animal rights rules were sadly broken. However, back in the day, President Calvin Coolidge had a fierce fondness for adopting all types of animals, including bobcats, donkeys, a wallaby, and one whole baby hippo. Gifted to him by a friend, the hippopotamus was a pygmy hippo named Billy. Billy the Hippo was swiftly moved to the National Zoo in D.C and, curiously enough, is the common ancestor of most pygmy hippos in the U.S.!

When I was 5, I wanted a pony for my birthday. And maybe I still do, in fact, want one. But unfortunately, just like many other Americans, there is no room in my life for a horse. But Caroline Kennedy, the daughter of former President John F. Kennedy, wasn't just any young girl. She was gifted a 10-year-old part-Shetland gelding from Vice President Lyndon B. Johnson. Caroline named it Macaroni, and the rest was history. While Macaroni was not only the pet of all our dreams, the horse and Caroline also inspired a certain song by writer Neil Diamond — have you ever heard of "Sweet Caroline"?

During the presidency of William Howard Taft, a pet cow was continually seen grazing on the White House lawn. Known as Pauline, the cow provided fresh milk and dairy products to the Taft family 24/7.

In true dad fashion, president Theodore Roosevelt decided to allow his son, Archie Roosevelt, to keep a pet badger named Josiah. The badger was described as a wild animal “whose temper was short but whose nature was fundamentally friendly." Archie would carry the badger around in his arms. When Roosevelt told him that the badger might bite his face, Archie replied: "He bites legs sometimes, but he never bites faces."

Theodore Roosevelt's Pet Badger Josiah- Kept at the White House, until he started attacking guests, and was moved... pic.twitter.com/B6wl6QV0zq

Questionable decisions seem to be a theme amongst our past presidents, but their pets truly never disappoint!