PLAYLIST PICKS: The Boy From the Crowd 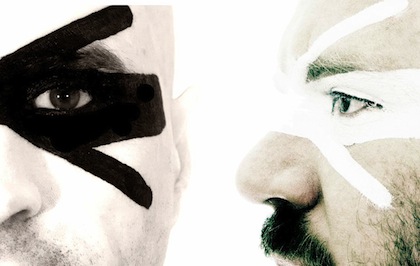 It feels weird to compare an artist to David Bowie, because he’s, you know, Bowie, but there’s something about the East London rock duo The Boy From the Crowd that feels Bowie-inspired, and maybe a little Clash as well. The duo makes music that is a fusion of noisy indie rock, bluesy rock, and punk. There’s a lot happening within their contained space.

The duo is made up of singer/songwriter/guitarist Vinny Piana and drummer Vegas Ivy, who met and found that they shared a musical direction and drive too similar to pass up. They recently released their single “Revelator”, and it’s definitely worth sharing.

“Revelator” has clear throwback energy in both the music style and also the video. Black and white geometric journey through space, anyone?

Alongside the punk throwback feel, though, is something that Vinny and Vegas have created together, a sound that is sometimes twisted and sometimes gutsy in its delivery.

As for Vinny’s lyrical decisions, he likes to ponder about how the choices that we make can go down drastically different paths, into bliss or sheer disaster. (And for some reason, why we often take the road into the fiery depths instead.) The perfect way to pound out those incessant “what if” thoughts in the mind is through a driving punk rock song, no? Vegas seems to agree, taking a hard-hitting approach to all drum activity.

Of the song, Vinny says: “This song is about some of the most primal feelings a man or woman can have. It's about our ongoing, desperate quest to find our soul mate, the doubts that always arise as to whether we have made the right choice and the feelings of powerlessness and despair that result.”