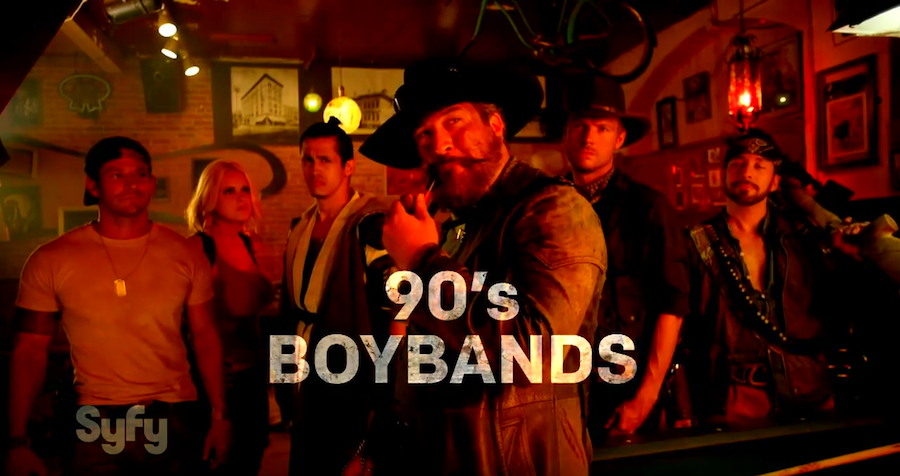 Well… at least some of them are.

This Mad Max-apocalypse-meets-cowboys-in-a-western-infested-with-zombies flick seems like the perfect opportunity for a musical round-up of my favorite '90s boy bands! But is this eclectic combination of prolific story elements just crazy enough to work?

Following in the illustrious footsteps of SyFy classics like Sharknado, Dinocroc vs. Supergator, Ice Twisters, and Ice Spiders, Dead 7 brings audiences what they never knew they needed.

I must warn you, though, there is no singing or dancing throughout the whole film. Bummer, I know. How can you have this ensemble cast and not have a musical number? The closest thing is the track the boys laid down for the end of the film which we will get to later. And even if I didn’t get my dancing copperheads while Nick and Joey harmonize an apocalypse-themed song and make my dreams of a boy band battle come true at last, I still enjoyed watching the mayhem unfold for 12-year-old Me's heroes. There were a lot of things in the film that I didn’t understand, but who cares?? Here are my 7 favorite things about Dead 7:

The beginning of the film is reminiscent of the apocalyptic Mad Max style, with a dark, sick, fight-for-your-life-in-a-world-gone-to-Hell atmosphere. It creates an interesting addition to the already apocalyptic zombie world. Mashing this element in with a western aesthetic film may seem weird at first, but once you settle into the film, you can see that some cowboys might be badass enough to make it in a Mad Max apocalypse.

Which leads me to the twisted leader and creator of the apocalyptic world, Apcoloypta. She is sick and twisted enough to keep zombies as pets and feed them live meals, if you know what I mean.

Apcoloypta's right hand man, Johnny Vermillion (the one dressed like a scary 1920s silent movie-inspired clown), steals the show. McLean’s performance of a troubled character who has fed his darkness and seems to have found his place in this cruel world is by far the most well-developed character in the movie and [*spoiler alert*] goes down in such a way that brings honor to his character.

The beginning introduction of the film and characters make a great homage to comic book film adaptations like Kill Bill and Scott Pilgrim vs the World. This theme continues up to the rising action with a nice stylized form.

YAASS KWEEN! Do I want a super album of my favorite boy bands? You, betcha! I’m already picturing a music video for “In The End”. I’m getting chills.

Seppuku is a Japanense ritual suicide that is portrayed in many different anime cartoons and other stories and is also used in this film. Although the character is not portrayed or given Japanese or samurai qualities, he wields a samurai sword, and when faced with the loss of his true love, he has only one choice...

Played by Joey Fatone, Whiskey Joe explains that the extra flask that he carries is filled with blood and is attached to a string rigged to set off some kind of explosive on his person. Not one to live the life of a copperhead, if he turns into a zombie, he will smell the blood and BOOM! Whiskey Joe turns into Sloppy Joe.

I laughed, I cried, I reminisced on my loves from my teenage years. You can catch Dead 7 on SyFy!