10 Most Memorable Moments from Season 2 of "Unbreakable Kimmy Schmidt"! 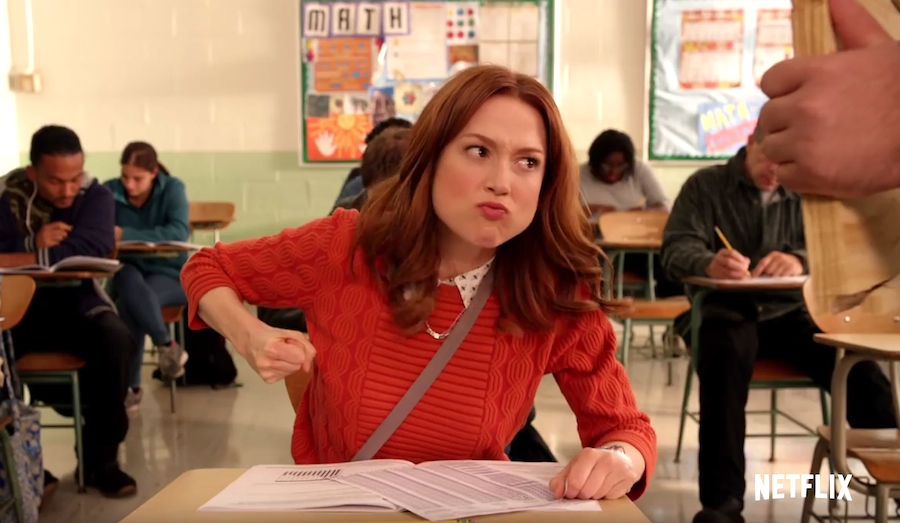 If you’re like me, there is a high chance you hid under a blanket and binge-watched all (or most) of Season 2 of “Unbreakable Kimmy Schmidt” over the weekend. The second season of Tiny Fey's hit Netflix show proved that the charm of "Kimmy Schmidt" is, indeed, unbreakable. Although it may seem impossible, the second season is even more funny (and absurd) than the first. I won’t give too many details away regarding the plot (you’ll have to watch and find out!), but the Season 2 is loaded with numerous sight gags, pop culture references, guest stars, and oddball moments that made it truly brilliant.

Here, in no particular order, are the top 10 moments from Season 2 (WARNING: POSSIBLE SPOILERS IF YOU HAVE NOT WATCHED THE SEASON!):

While I find Eichner randomly accosting New Yorkers about pop culture to be delightful, many people echo Kimmy’s (Ellie Kemper) beef with him: HE’S TOO LOUD. As Kimmy reflects on how she handles PTSD, she recalls a time when she attacked Eichner on the street after he asked her whether or not Cate Blanchett is actually talented or just tall (a question the characters ponder throughout the season). Seeing Eichner curled up in a ball and screaming that Blanchett is a treasure is hilarious, but bonus points to the writing team for bringing in the same joke again.

2. Amy Sedaris: Watching Sedaris as Mimi, the insane divorcee who attaches herself to Jacqueline (Jane Krakowski) like a barnacle, was one of the greatest joys of Season 2. I was never 100% sure why Mimi was constantly around, but when she manages to steal every scene she’s in, who cares? I particularly liked Sedaris running into the apartment and kicking her heels off to avoid stepping on an expensive rug, as well as locking herself in the closet and screaming “I smell a man!” when Kimmy’s date comes over. It’s too hard to pick one shining moment for Sedaris, and this just reminded me of how much more we need of her on our TVs.

3. Kimmy discovering that all of her childhood crushes are gay

Maybe this is just because, as a child, I too had a crush on Lance Bass, but I enjoyed (and related to) Kimmy’s dismay over learning that all of her childhood crushes are gay. It’s so fitting that young Kimmy was in love with Lance Bass, Ricky Martin, and Niles from “Frasier” (AKA David Hyde Pierce), and that she would be so shocked to learn that they all prefer the company of men. Kemper really sells Kimmy’s shock over this (can we just give her an Emmy already?).

For no apparent reason whatsoever, the sixth episode ends with a Mentos montage. I wasn’t sure if this was a callback to the '90s (which the writers seem to be quite fond of) or if they just felt like “hey, remember those Mentos commercials? Let’s bring them back!”, but either way, it works. I especially like that a Mento falls into a bottle of Coke, causing it to explode. Urban Legend CONFIRMED!

5. The Bunny and Kitty Song

Kimmy’s impromptu song about Bunny and Kitty, two furry friends who randomly appear at the end of a promotional Cosmetology video, is simply adorable. But the gag becomes so much better once it is revealed that Bunny and Kitty are actually the stars of a crime procedural. Voiced by Will Arnett and Dean Winters, Bunny and Kitty are from different sides of the law (one Federal, the other not) which forces them to work together to take down the bad guys. The show itself is just a bunny and a kitty playing, which makes me wonder why no one has actually pitched this to a major network.

Titus’s (Tituss Burgess) new boyfriend, Mikey (Mike Carlsen), is simply adorable. Their entire relationship has been too cute for words, from when Titus takes care of Mikey when he’s sick to Mikey coming out to his entire Italian family (one of whom is a puppet). But their crowning moment is easily when they bond over their shared love of The Lion King, comparing themselves to Timon and Pumba. Of course Titus is sleek like a meerkat, and Mikey is clearly his lovable Pumba.

There is nothing more frustrating in the world than autocorrect. Seriously, what was meant to be a helpful invention has turned family members against each other and led many friends into deep bouts of confusion. “UKS” understands this and embraces it in a brilliant running gag of having a certain swear word always autocorrect to “duck”. The first instance is where Jacqueline texts Kimmy to “get the duck over here” which Kimmy interprets as Jacqueline wanting a duck, and Titus listing his apartment on Airbnb as a “cozy uptown duck palace”. This bit never failed to make me laugh.

8. Titus as a hipster

Titus had many crowning moments this season, from his transformation into Scrooge to singing rather strange showtunes (I’m so glad Daddy’s Boy reappeared). But one of his greatest moments had to have been his posing as a hipster doorman. In an attempt to help Lillian rid the neighborhood of hipsters, Titus disguises himself as a doorman to a “speakeasy”, donning the perfect hat and taking notes on an Etch-a-Sketch. When one of the hipsters (Zosia Mamet) starts shouting random passwords to get in, he shrugs and asks, “Are you even trying?” Hipster Titus may be one of my favorite Tituses--er, Titi, simply for his deadpan snark and sweet Etch-a-Sketch.

I have always felt that Anna Camp was a deeply underappreciated actress, from her manic behavior in Pitch Perfect to her sadness as a trapped housewife in The Help. In “UKS”, Camp leans more in the direction of her Pitch Perfect character. Her portrayal of Deirdre, the queen of the high-class moms, is hilarious. Deirdre’s backstory is weird enough -- she has a poli sci degree from Princeton but is now reduced to using her superior intellect to buy dog stationary, so she torments Jacqueline, and if put in the wrong hands could come across as just nasty. But you can’t help but be fascinated by Deirdre as she urges Jacqueline to challenge her, bursts into laughter, bursts into tears, and then back into laughter. Her mood swings are so volatile, she’s a perfect fit for the world of “UKS”. My only regret is that she didn’t get to spend more time with Sedaris on screen, but hopefully they will both resurface in Season 3!

10. Drunk Tina Fey: In what may be her darkest role yet, Tina Fey pops up as Kimmy’s insane, belligerent, and alcoholic therapist, Andrea. While it could be argued that Andrea is the worst therapist on the planet, she does actually help Kimmy have a breakthrough (we learn that Kimmy has quite a few issues with her mom). Andrea flips back and forth between "Day Drea" (She’s put together! She runs marathons!) and "Night Drea", who throws up in the back of Kimmy’s car and whips and nae-naes for no apparent reason. This is certainly one of the darkest, crazed roles Fey has ever played, yet it works for her. I hope Andrea comes back next season!

What were some of YOUR favorite moments from Season 2?