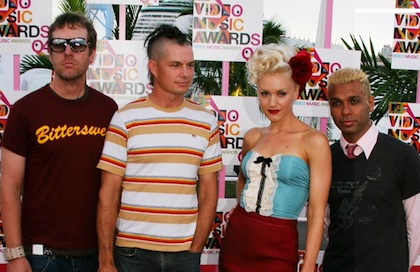 We were so psyched earlier this year to hear that No Doubt would be reuniting for their 6th album to be released this fall! We were equally bummed to learn this week that the album has been delayed until next year. Super bummer!
But, it’s been ten years since their last album (2001’s Rock Steady), so I suppose a few more months won’t kill us. The hiatus certainly hasn’t hurt frontwomanGwen Stefani, who has been keeping herself busy as a solo artist, a fashion designer,  the wife of Gavin Rossdale, and the mother of the two most stylish toddlers on the planet. Girlfriend may be 41 years old, but she can still match peroxided heads with any of the youngsters in the biz today, and we our love for her ska and reggae-infused pop band has not dwindled one iota in the past decade.
So, until we get that bright, shiny new No Doubt album in our hands (or on our iPods, as is the case these days), let’s look back in order to look forward – here’s a collection of some of my favorite No Doubt vids from the last fifteen years! Enjoy!
"Spiderwebs" (1996) - Their second single from their breakout album, Tragic Kingdom; Gwen's love of Asian people was evident early on...
"Don't Speak" (1996) - The band's first (and, to this date, only!) #1 hit, allegedly based on the breakup between Gwen and bassist Tony Kanal, although the video seems to imply, instead, an imminent break up of the band due to the media's pre-occupation with Gwen. It's a story we've seen unfold time and again in the history of popular musical groups... and yet one which, in real life, No Doubt seemed to successfully evade. Go figure!
"Hella Good" (2002) - Only Gwen Stefani can manage to be colorful in black and white... Waterworld only wishes it was this cool.
"Underneath It All" (2002) - Gwen at her most glam, gorgeous, and sexy, and going back to her roots -- singing directly into a low-angled, wide-lensed camera.
(Photo via WENN)
- Katie Marzullo, YH Staff Editor
[email protected]