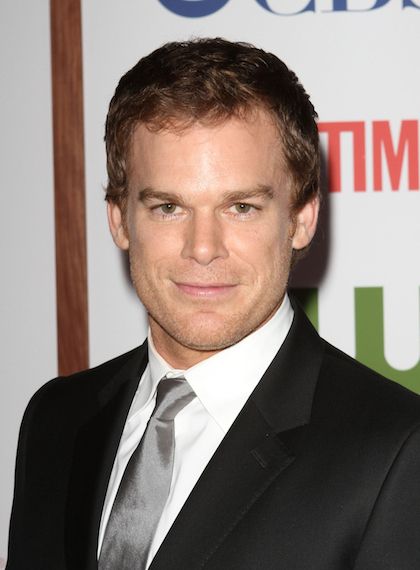 Before becoming television’s favorite serial killer, Michael C. Hall was a well-renowned on- and off-Broadway singer and actor. He featured in popular shows such as Cabaret, Skylight, and Chicago where he sang his heart out and gave phenomenal performances.
The Golden Globe-winning star’s next move is to return to Broadway for the upcoming play, Big Fish, expected to open in the spring of 2012. Big Fish’s screenplay, by John August, is an adaptation of Daniel Wallace’s 1998 novel. The book, movie, and play all center around the troubled relationship between a son, Will, and his father, Edward Bloom. Will tries to get to know and learn more about his dying father by reliving the mysterious stories and tall tales Edward has told him about his life as a young man. If you have seen the movie, then you know that it will be a wonderfully crafted play with the most unique and beautiful scenery.
Hall is booked to play the main character of the younger Edward Bloom who, in the 2003 Tim Burton film, was played by Ewan McGregor and Albert Finney (as the older version). According to sources, the part of Edward Bloom was originally intended for Hugh Jackman, but the actor’s busy movie filming schedule got in the way of his Broadway plans. Producers of the play decided early on that they wanted a screen actor to play the main roll of Edward, and whenJackmancould not fully commit, they turned to Hall, who had a few big productions under his belt already -- the perfect choice.
While Hall prepares for his stage performances in the spring, "Dexter" season 6 premiers October 2 on Showtime!
(Image viaFayesVision/WENN)
- Samantha Blum, YHStaff