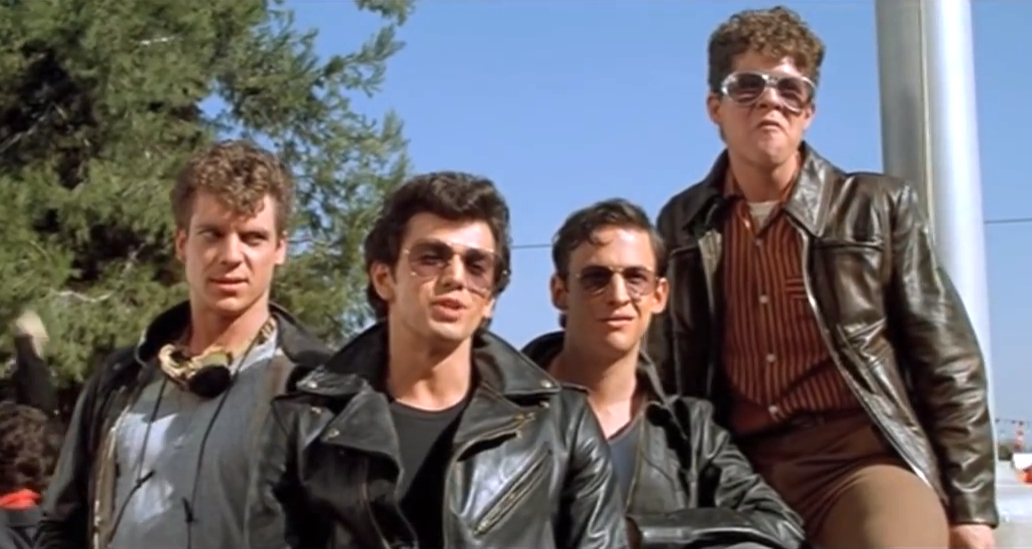 For many, this week marked the first day of school, and it is guaranteed that at least 500 high schools across America will put on a production of Grease some time this year. Easily one of the most recognizable musicals, Grease introduced the world to delightfully campy songs (that are actually quite decent) and the quintessential teen couple: Sandy and Danny. The stage musical and the film were hits, so it’s no surprise that studios wanted to continue to capitalize on the Grease-y gravy train, hence how the spectacularly ludicrous Grease 2 was born.

Released in the summer of 1982, Grease 2 is unbelievably bonkers. Featuring Michelle Pfeiffer in her first starring role, Grease 2 tells the exact same story of Grease, simply with the genders reversed. Set in 1961, two years after the events of Grease, Grease 2 follows a new group of T-Birds and Pink Ladies at Rydell High. The film opens with a group of students, all of whom are, for some reason, beyond ecstatic to be returning to school. They do flips, pirouettes, splits... one guy even leaps through a window to get to class. The entire scene makes absolutely no sense and therefore is wonderful. We quickly meet Stephanie (Pfeiffer) and the new Pink Ladies (who are basically non-union versions of the original ones) as well as the new T-Birds, who seem to have been Wet Hot American Summer-ed -- they’re supposed to be teenagers and yet they look to be about 45. The scene also introduces the delightfully slutty Miss Mason (Connie Stevens), whom I’m pretty sure is sleeping with the entire school:

The film then introduces Michael (Maxwell Caulfield), who is not only Sandy's cousin but also her goody-two-shoes male doppelganger. He is shown the ropes at the school by Frenchy (Didi Conn), who has returned to Rydell to study chemistry(?!). Michael quickly falls for Steph, who promptly wants nothing to do with him. And that’s the last scene in which this film resembles anything remotely close to a plot.

As Michael pines for Stephanie, we learn that the T-Birds have a rival gang which appears to be led by the same evil guy from Grease. They roll onto the track like the Sons of Anarchy and no one seems to find it strange that an entire motorcycle gang just rolled into the school. The leader, who looks as though the Crypt Keeper and Nicolas Cage had a baby, delivers some threats before everyone decides to go bowling (as you do).

What is easily one of the most random moments (and what I presume is supposed to be the “Greased Lightning” equivalent) is an entire song dedicated to bowling. For a good 15 minutes, the characters jump around a bowling alley singing about the joys of scoring. Literally. One of the main lines is “We’re gonna score tonight!” The number features bowling nuns for no discernable reason as well as a full-on dance competition in the lanes. The number has some sort of plot purpose but, you know, who cares. Bowling is much more fun:

Michael and Steph have a random conversation in which she sings the best song in the whole film, “Cool Rider”, which is exactly what it sounds like. Steph wants a cool rider. Once Michael figures this out what, he immediately starts writing essays for money and buys a motorcycle. It turns out that he just needed some inspirational words from Frenchy to ride it (who then disappears after she apparently dies in a chemistry accident) and becomes a motorcycle God of sorts.

Sadly, none of the other songs are as epically insane as “Reproduction” but the rest of the film still has a few crowning moments. Michael as a Hell’s Angel becomes great fun, as he keeps stalking Steph and offering to light up her cigarette. He later wanders aimlessly through the school cafeteria, where the students appear to be having a food fight, crooning in his head about how Steph has no idea who he is because he never removes his steampunk goggles. The kids enter the talent show and one girl dances in a giant cardboard tissue box, singing about the different seasons. There is an entire subplot on the Nuclear Holocaust in which one of the T-Birds tries to seduce a girl, claiming they have to do it for America. And then there is a giant luau, which the rival gang crashes and promptly drives straight into the pool. There is no explanation for why they are there or how the school can even afford to put on a luau of this size, but just go with it.

Grease 2 is certainly no Grease, but it’s so deliciously campy you can’t help but love it. It’s as if the filmmakers just threw up in their hands in the middle of filming and just said, “You know what? Let’s just have everyone dance and sing about bowling and sex!” And the result is fantastic. While there are a fair amount of Grease 2 haters out there, I advise them to shake it off -- how can you not like a movie that has an entire song about the birds and the bees and how great bowling is in it? And of course, Michelle Pfieffer being fierce as hell:

P.S. -- Check out Johnny Knoxville's shout-out to this film and "Cool Rider" in our recent chat with him!