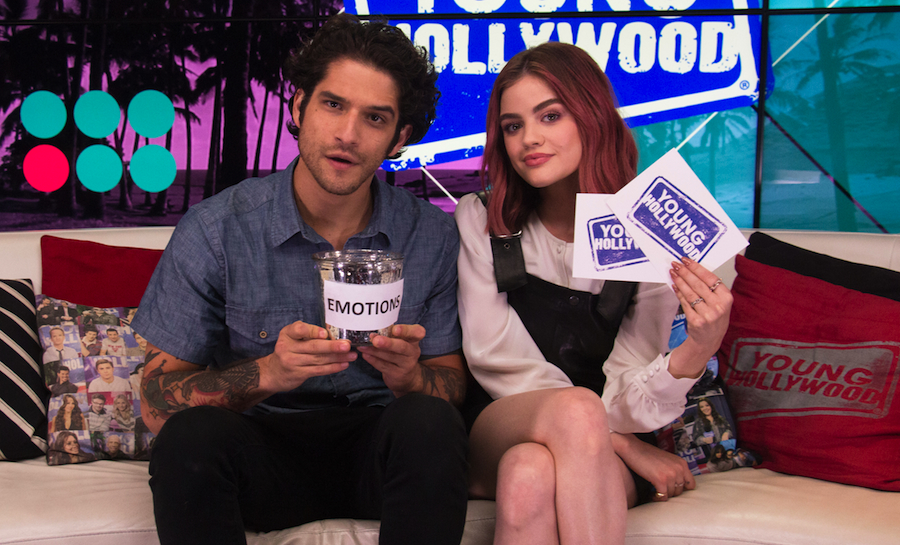 “Pretty Little Liars” and “Teen Wolf” fans, unite! Lucy Hale and Tyler Posey just visited the Young Hollywood Studio to give us all the deets on their upcoming horror movie Truth or Dare. Through laughs and confessions, Lucy and Tyler brought their energetic and genuine selves to the Studio.

Truth or Dare is based on a group of friends leaving their Spring Break vacation without knowing that an infectious demon has come home with them. This demon will force them to play the classic game of "Truth or Dare", leading them to dangerous and life-threatening situations!

This is Lucy’s first leading role in a feature film. “I remember working really hard to get this audition,” Lucy said. She was very excited when she got the role of Olivia, since she said that auditions she works hard for she never gets. She and Tyler agreed that they had too much fun on set.

Tyler plays Lucas in the film, and though his character is sort of similar to him in real-life, he's different enough for him to feel challenged and excited by the role. In the movie, Tyler will be liked by two girls, one of which is Lucy’s character. “Who doesn’t like being liked?” Tyler joked.

The two even taught us how to do the creepy demon face from the movie by putting their heads down at an angle and looking "dead behind the eyes" (yikes!). This is the face they had to make when they became possessed by the demon in the film. “It’s like the Instagram filter where your mouth gets big,” Tyler said about looking possessed.

Lucy and Tyler even told us about their irrational fears. For Tyler, it is knowing that he has swallowed 4 to 5 spiders in his sleep. For Lucy, it is losing her mind without realizing it and thinking everyone is crazy when, in reality, she’s really the crazy one. If these are their irrational fears in real life, we can’t wait to see what kind of fears their characters have to face in the film!

After the interview, Lucy and Tyler played a game where they had to read emotional fan tweets and match them with an accurate emotion. This is a game you loyal fans don’t want to miss! Get ready to see Lucy and Tyler get into character and play a game that had the whole Studio laughing with their responses!