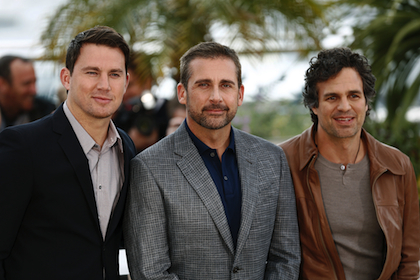 Well, I guess this was inevitable. Anyone who saw Little Miss Sunshinefound out right away that not only is Steve Carella very capable dramatic actor too, but he also has a bit of a dark side… Hell, we could already kind of see that way back during his stint on "The Daily Show"!

Now, he is diving headfirst into (or off) the deep end for Bennett Miller’s thriller Foxcatcher, which sees Carell portraying real-life crazy person John du Pont. For those unfamiliar with the story, du Pont was a millionaire and a schizophrenic, two things that generally don’t go too well together. He became obsessed with amateur sports, wrestling in particular, and built a training facility on his estate in Pennsylvania. In 1996, he shot and killed his friend, wrestlerDave Schultz. A police standoff ensued for two days before he was finally arrested, tried, and found guilty of the murder. He had pled not guilty by reason of insanity, and while everyone agreed he was definitely mentally ill, they decided he knew what he was doing when he pulled the trigger. His motives remain foggy to this day.

So, this is the man Carell is playing (Mark Ruffalo portrays Schultz). He joins the ranks of several comedic actors who have successfully taken their talents to the dark side, includingRobin Williams, Steven Weber,David Hyde Pierce, and Jim Carrey. It’s hard to say why comedians make such good crazy people, but it probably has to do with them already being a little bit “off” in the first place. I guess it’s not quite as big a leap from “zany” to “crazy”.

Rounding out the cast is Channing Tatum (as Dave's brother Mark), Sienna Miller, Anthony Michael Hall, and Vanessa Redgrave. Trailers and clips have begun popping up on the interwebs, and chatter out of Cannes this week basically boils down to, the Academy might as well start engraving Carell's name on an Oscar now. Wow!

Judge for yourself below!