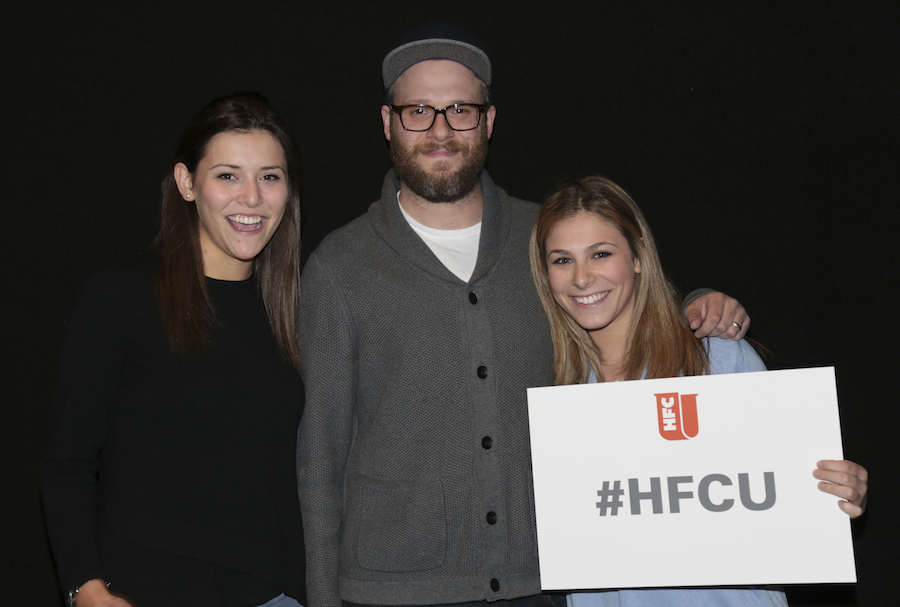 When he isn’t on our TV screens making us laugh with his classic off-color humor, Seth Rogen is actually being mad charitable, and he wants YOU to get involved too!

Seth and his lovely wife Lauren Miller Rogen have taken an active role in fundraising for Alzheimer’s Disease and educating the Millennial generation on the effects of the debilitating condition. In 2012, Seth and Lauren founded Hilarity for Charity, a campaign that has raised $6.5 million for Alzheimer’s research since it first launched five years ago.

Part of the organization’s outreach has included the annual Hilarity for Charity Los Angeles Variety Show, which you might have heard of due to the extremely star-studded lineup of performers and speakers including Miley Cyrus, James Franco, Bruno Mars, Mindy Kaling, and many more.

Beginning in 2014, the Rogens expanded their charity, creating a new branch geared specifically toward college students, Hilary for Charity U. HFCU’s mission is to encourage college students across the nation to throw their very own HFC events on their respective campuses. More than 230 schools involved have collectively raised over $250,000 to support Hilarity for Charity. We have to admit, that’s pretty impressive.

It’s a worthy cause to align yourself with, because not only is Alzheimer’s a truly devastating illness, but according to the Alzheimer’s research association, it’s also the most expensive to treat. Finding any source of treatment could reduce spending by 45% in 2050. Not to mention, treatment could help slow the onset of the incapacitating effects, which, if you’ve ever had a loved one affected by the disease, you know is significant.

Beginning today — that’s right TODAY (February 1) — Rogen is giving more colleges an added incentive to get involved, by throwing a contest with a seriously exciting prize. College students will have the chance to win a campus visit and private screening with Rogen himself, not to mention a slew of other cool prizes that can be won by donating money to the cause.

The contest is being conducted through Crowdrise, a website dedicated completely to fundraising for amazing causes. All you have to do is sign up, begin planning your HFC event at your university, and raise as much money as you can for your chance to win. Even if you only raise $150, you still get a “Kick Alz in the Ballz” T-shirt! Additionally, youth charity Positive Tracks has agreed to match individual fundraising up to $23 and team captain fundraising up to $230 for teams doing a Kick Alz in the Ballz kickball game. So, if you love comedy and are looking to make a difference, this seems like a pretty favorable place to start.

If you’re not in college, you can still get involved in the charity by hosting a HFC party in your city or community. The best part is, you can host any kind of fundraising event you want for the cause, like a car wash or a bake sale. If you’re not looking to throw an party either, you can make a donation to the charity via their website. You have until April 9 to act -- Every bit counts!