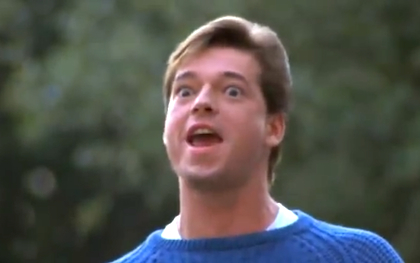 My introduction to the utter fiasco that is Silent Night, Deadly Night Part 2 was given to me by a friend of mine in Australia as a way to cheer me up. He showed me the infamous “Garbage day!” scene (which we shall get to in a bit) as a way to cheer me up from a break-up I was currently going through. The absurd idea that someone would randomly shoot a person who was simply taking out their trash while also screaming out “Garbage day!” made me burst into an infinite fit of giggles, and indeed helped cheer me up. Now, every time I hear the words “Garbage day!”, I can’t help but think about how much I appreciate my friend showing me that clip during one of my darkest times.

Silent Night, Deadly Night Part 2 is actually a sequel to the equally ridiculous Silent Night, Deadly Night. In fact, this 1987 follow-up is really just a series of flashbacks to the original movie, with some new footage thrown in for good measure, and it feels as though the first 5 minutes of the movie are just credits. After you are subjected to what feels like the first 40 minutes of the original Silent Night, Deadly Night, the sequel actually begins with how Ricky Caldwell (Eric Freeman), the 18-year-old brother of Billy Caldwell, the killer from the first movie, has been up to. In the extended recap, we learn that Billy and Ricky’s parents were killed by Santa Claus and were raised by evil nuns. It also turns out that Ricky has also committed a series of murders and is explaining his tale to Dr. Henry Bloom as he awaits trial in a mental hospital. Ricky was eventually adopted by a Jewish family, where he got to escape from evil Mother Superior who reprimanded him for his naughty behavior (also the plot to many a B-grade porn film), and Ricky goes on to only kill two people... one of whom's girlfriend thanks Ricky for doing so (huh).

Alas, it is when Ricky falls in love with Jennifer (who is, for lack of a better term, a bona fide horror film hussy) that things take a turn for the worse. When the pair go to see a terrible horror movie about a killer Santa Claus film (wink wink! It happens to be the first Silent Night, Deadly Night! How meta!), Ricky becomes angry at two of rowdy fellas sitting in the back of what may be the smallest, dingiest theater I have ever seen. Jennifer’s hussy status is confirmed when an audience member calls Ricky the other f-word, to which Jennifer replies, “Well, we both know that’s not true.” (No one bothers to acknowledge how offensive this term actually is, probably because it was the '80s.) The film eventually sets Ricky off with the word “punish”, which was used by his Mother Superior, so he bolts, leaving Jennifer to rekindle the flame with her ex-boyfriend Chip (sort of), who has one of the most epic mullets I have ever seen. Seriously, are birds living in this guy’s mullet? Plus, I’m pretty sure he may be way creepier than Ricky:

After their lovely little date, we move into my favorite scene of the film: Ricky’s killing rampage for NO APPARENT REASON WHATSOEVER. This all begins when Mega-Mullet Chip insults Ricky, so Ricky reacts the way any normal person would: He electrocutes him with jumper cables. After Jennifer tells Ricky that she hates him (again, understandable reaction), he decides to “punish” her by strangling her with the antenna of a car. Once Ricky gets a hold of a gun, it's on now. He decides to punish the entire neighborhood, resulting in one of the greatest deaths in horror film history: GARBAGE DAY! (Because garbage is inherently naughty!)

The rest of the film climaxes after Ricky kills Dr. Bloom and then he and Mother Superior finally duke it out! Of course, he has to kill a Salvation Army worker and steal their Santa suit, so that he too can become a killer Santa Claus. The best part of the entire Ricky vs. Mother Superior showdown is when he cries, “MOTHER SUPERIOR!!” in a voice that is… you just have to see the clip, there are no words to describe how much this makes me laugh:

There are oh so many reasons as to why I adore Silent Night, Deadly Night Part 2. From the horrible acting and the fake homage of Psycho music, to the insane deaths that occur, Silent Night, Deadly Night Part 2 is truly the crème de la crème of B-rated horror films. But it truly belongs to Freeman. He just has an absolute ball with this character, from his lines and his shooting to his eyebrows. Really, Freeman’s eyebrows do more acting than any other actor in this film. They are a character unto themselves. Take a look at how much more acting his eyebrows do! The eyebrows deserve an Oscar!

A few fun facts about the film that brought us "Garbage Day!":

- The director on the commentary of the DVD wanted to include Freeman on the track as well but could not find him. In fact, the whereabouts of Freeman are still unknown… Be on your guard the next time you take out the trash!