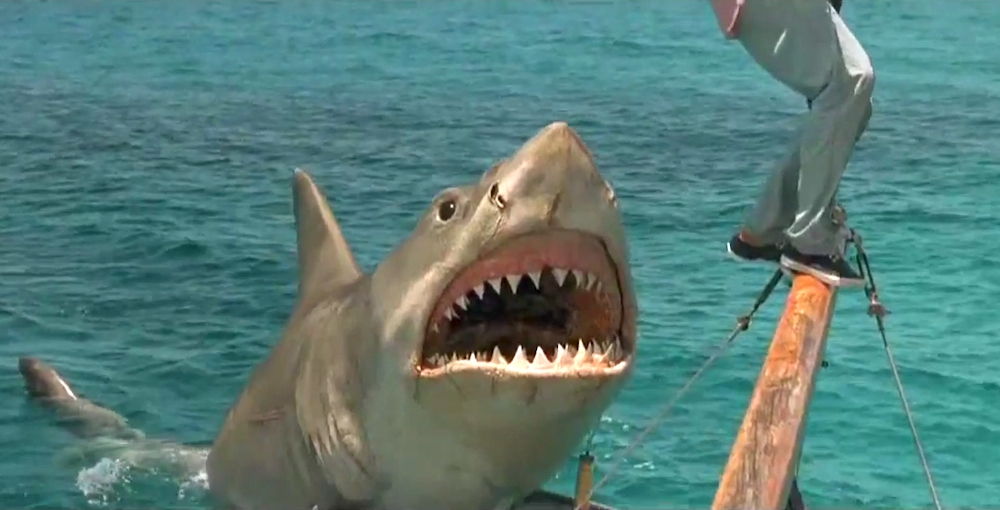 This time it's personal!

It’s that time of year again: grocery stores have put out mounds of orange-colored candy next to Christmas lights, and everything from hamburgers to Bilbo Baggins have been made into a "sexy" costume -- it’s Halloween Season! Which means it’s time for me to review more scary movie guilty pleasures.

I decided to kick off this year with the fourth film in a classic franchise: Jaws: The Revenge. The fourth film in the series, which first introduced us to the world’s deadliest shark, Jaws: The Revenge is completely bonkers and it should be noted right off the top that Steven Spielberg had no involvement with the film whatsoever. Before we jump into the review, here’s the original trailer:

The film opens with Ellen Brody (Lorraine Gary), the widow of OG Jaws hero Chief Martin "Smile You Sonofabitch!" Brody, living with her eternally-annoying son Sean and his fiancée. For the first 15 minutes of the film, it is nearly impossible to tell who these people are unless you're intimately familiar with the previous films (with the exception of Jaws III, which this film apparently pretended never existed). Sean, who is now a local cop following his daddy's footsteps, gets called away from a night of Christmas Eve revelry to deal with a deadly floating buoy (you just can’t trust those buoys), and he is promptly attacked by a random shot of shark teeth (it seems that all of the shark footage is borrowed from previous Jaws films, à la Silent Night Deadly Night 2). It takes Sean a good five minutes to realize that the shark has taken his arm off, and he then proceeds to scream while hanging precariously over the side of the boat -- the same side that the shark just tore apart.

Naturally, upon received the news of her son's death, Ellen immediately jumps to "VENGEANCE SHARKS" as an explanation. Her other son, Michael, and his wife and even MORE annoying daughter visit her on Amity Island and convince her to come stay with them in the Bahamas for the holidays. Because being surrounded on all sides by open water is just where you want to be after a horrendous shark attack. They all then board a plane driven by Michael Caine (whose actual name in the film is Hoagie, yet we never actually see him eat a sandwich; missed opportunity). To make matters worse for Ellen, Mike -- despite having literally been chased by man-eating sharks his whole life -- is a marine biologist, along with his Jamaican partner Jake (Mario Van Pebbles), whose Jamaican accent sounds like Hermes from “Futurama.” It becomes quickly apparent that Jake is secretly in love with Mike, as he gives him a colorful shirt for Christmas and purrs, “May your sex life be as busy as your shirt,” right in front of Mike’s 6-year-old daughter. The two continue to flirt and fight openly in front of their wives, and I was deeply disappointed that they never got together. Every scene of those two was like a Nicholas Sparks’s novel waiting to happen. Here’s a deleted scene that clearly proves that they were in love with each other:

Elsewhere, Hoagie attempts to seduce Ellen by letting her fly a plane (not a euphemism, unfortunately) before taking her to dance at a local festival called a "junkaroo". No one knows where Hoagie came from or how he ended up in the Bahamas, but his inexplicable presence makes the movie that much better.

Finally, there’s the shark. There is nothing remotely frightening about the shark. It was actually kind of cute, to be honest, like an aquatic pitbull. Seriously, look at the screepcap at the top of the page -- it looks like a big water puppy begging for treats. To make it even more ridiculous, Ellen seemed to have some kind of "shark-dar" that would kick in whenever the shark was nearby or stalking her only living son. At what point did Ellen and the shark "imprint" on each other? They must have deleted that scene too.

I won't spoil the ending for you, but it involves flashbacks to events Ellen was never there for, Hoagie finally living up to his name, one last dramatic moment between Mike and Jake, and an inexplicable shark-splosion.

Jaws: The Revenge is a truly absurd horror film that is so bad it’s good. There is no way to watch this film without bursting out laughing every five minutes. If you are looking for a real gem to screen at your Halloween party, I wholeheartedly recommend Jaws: The Revenge.