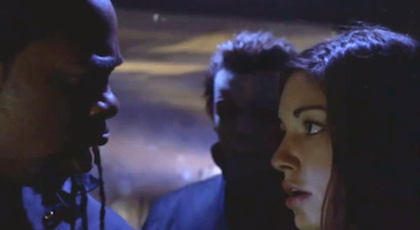 Happy Halloween, dear readers! We have come to the end of my favorite scary guilty movie pleasures (for now), but do stay tuned for a Holiday Edition of my favorite ridiculous holiday films.

As my Halloween treat to you, I decided to review the finale of an all-time classic horror series: the infamous Halloween films. The conclusion to the grisly tale of Michael Myers is by far one of the best unintentional comedies I have seen in quite a while... and fails to actually conclude the tale of Michael Myers. The original Halloween, which is hailed as one of the greatest horror films ever made and introduced us to one of the most frightening villains, is a must-see in terms of an actual scare factor. However, if you are looking for a hilarious comedy to watch with your friends tonight over caramel apples and candy, then I highly recommend Halloween: Resurrection.

The films opens with Michael Myers (Brad Loree) finally taking down his sister, Laurie Strode, once again played by Jamie Lee Curtis. Curtis is by far the best actress in the entire film, but is sadly killed within the first 10 minutes. The film probably should have ended here, but alas, it goes on for another hour and twenty minutes. Halloween: Resurrection focuses on a group of insufferable college students who are informed by a company called “DangerTainment”, run by Freddie Harris (played by Busta Rhymes) that they will be spending the night in Michael Myers’s childhood home, and that their adventures will be broadcast live on the Internet. The group that they gather to ransack the home is as stereotypical as a season of “The Real World” -- a bunch of crazy white people and one sane black guy. In this case, it's a bunch of crazy white people, one stoned sane black guy, and one sane white girl with a creepy internet buddy. The group proceeds to explore the house until you-know-who (no, not Voldemort) busts in and goes on a killing spree, just like he does in the SEVEN films prior to this.

Busta gives the comedic performance of a lifetime, though it is difficult to tell if this is intentional or not. Freddie enjoys watching and screaming profanities at bad kung-fu films in the comfort of his hotel room, as well as drinking champagne with his hot assistant, Tyra Banks (AKA Nora…but really, just Tyra Banks until she’s murdered by Michael). In fact, there does not seem to be any point to having Tyra Banks in this film, other than to kill off Tyra Banks. But Busta is much more fun to watch in his scenes with Michael, where he screams out nonsensical profanities at him that make him seem more like a crazy man on the subway as opposed to an actual protaganist. After Busta dresses up as Michael Myers to scare the kids, he comes across the real Michael Myers, and proceeds to have the following confrontation with him:

BUSTA: I’m not payin’ you to be Michael Myers! I’m playin’ Michael Myers! And if them kids come around and see us dressed up in the same s***, it’s going to ruin the whole effect! God damn it!

Michael continues to stare blankly at him, and Busta continues to shout for at least another five minutes. I personally believe that Loree deserves an Oscar nod for not rolling around on the floor in hysterics at this point.

Beyond Busta’s brilliant comedic chops, we get to enjoy some truly genius lines from the group trapped inside the house. Jim (Luke Kirby), a crazy music major who wears a leather jacket to show how he stands out from the group, and Donna (Daisy McCrackin), a shrill feminist/current issues/some nonsense major proceed to flirt in a way that made me so uncomfortable I was relieved when Michael finished them off. At one point, Jim asks Donna, “Nice legs. What time do they open?”, which may be the creepiest line ever muttered in the history of cinema, and then later adds, “Why don’t you use your body instead of your mind?” And even after these lines, that made me positive that Jim was actually an axe-murderer, the two still get it on (maybe Donna should pick a new major). But thankfully, Michael kills them. Yay Michael!

We also have: Bill, played by Thomas Ian Nicholas (whom I kept imagining as "the guy who dated Tara Reid in the American Pie films"), as a huge creeper who is the first to be axed off by Michael; Jenna (Katie Sackhoff), a fame-obsessed horror hooch who’s death is so uneventful I don’t even remember it; and Rudy (Sean Patrick Thomas), who actually has a pretty great battle-to-the-death scene with Michael.

And then there is Sara (Bianca Kajlich), the obligatory innocent one who doesn’t actually want to be there in the first place, and therefore survives the movie (along with Busta Rhymes, because he is utterly fabulous). Sara and Busta manage to get out alive thanks to the help of her “internet friend”, a 14-year-old pale boy who, through the magic of palm pilots (I think?), tells Sara where Michael is in the house and saves her. Nevermind that he seems to be completely obsessed with her, that she is at least five years his senior, and that no one seems to find this arrangement odd except for his best friend. Because it is totally normal to have creepy internet friends watch your every move, just in case they can save you from a mass murderer while you’re trapped inside their childhood home.

Due the lack of logic, cringe-worthy writing, and absurd plot, Halloween: Resurrection is a delight. But really, this film belongs to Busta. From his screaming at the TV screen during the kung fu scenes, and his final words to Michael (“Looking a little crispy over there, Mikey. Like some chicken-fried motherfu***. Well, may he never, ever rest in peace.”), to his condemning the press for taking pictures once he has learned the evil of making money off of serial killers... Well done, Busta. This guilty pleasure belongs to you.