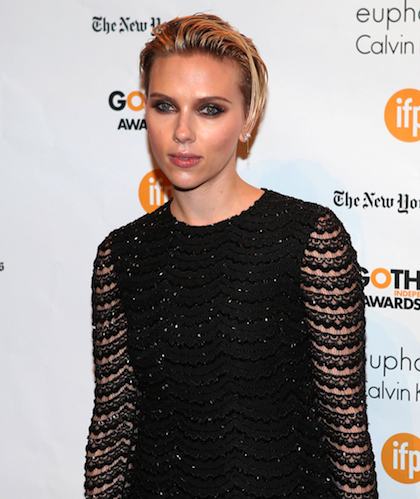 Actress Scarlett Johansson certainly has come a long way from Home Alone 3. She has garnered much critical acclaim in such indie films as Ghost World and the Sofia Coppola-directed film Lost in Translation. She also stole my heart (and maybe Spike Jonze’s when he cast her in Her) as the voice of Neptune’s daughter Mindy in TheSpongeBob SquarePants Movie. Nowadays, she is a full-blown butt-kicking powerhouse, with roles such as Black Widow in various Marvel films and the titular Lucy.

Now Johansson will add to her BAMF resume the lead role as cyborg Motoko Kusanagi in a live-action adaptation of the anime film Ghost in the Shell. Unlike rumors a few years back of a live-action adaptation of another popular anime film called Akira, which was said to star Leonardo DiCaprio, Ghost in the Shell is completely set to move forward with Johansson starring.

If you’ve never heard of Ghost in the Shell, let me sum it up for you. We are transported to the year 2029, where people can upload their consciousness into a cyborg body that will grant them superhuman abilities. Motoko is an assault leader for Public Security (a fictional law enforcement division). Despite her consciousness originally belonging to a human being (or her "ghost", as it is referred to), something happens in the process that somewhat disconnects the cyborg from the human’s mind.

While Motoko uses her genius intellect and superhuman strength to try and take down a supreme hacker named Puppetmaster, she wrestles with her thoughts on life as if she was ever actually human. She often questions if the memories she has are really from once being human, or merely a trick to fool her into having humanity. In short, she has a bad guy to fight while she wrestles her own cybernetic battle with existentialism. Whether her mind is the product of nature or is completely synthetic, you'll have to wait for Johansson’s version to come out, OR just watch the original anime. No matter how you look at it, what Motoko goes through does sound pretty human.

Speaking of questioning humanity, Johansson has already tackled a similar role to this last year. Take a look at the trailer for Lucy to refresh your memory:

There are definitely some similarities here. In Lucy, Johansson is made a drug mule against her will. The drug leaks in her body and unlocks special mental and physical abilities (all of which can do some serious butt-whooping). The more her brain unlocks, the further she moves away from what we typically consider human. She seems to be much less emotional than the vulnerable woman she was earlier on in the film, and with that loses some empathy. The two films aren’t directly similar, as I found Lucy to be more like Akira, but I wouldn’t be surprised to hear that the discipline Johansson showed in Lucy got her the gig on Ghost in the Shell. If you really want to see what else helped pushed her into the stratosphere of Ghost in the Shell, take a look at Under the Skin as well.

In other Ghost in the Shell news, there is a new anime film installment in the series going into production in Japan.