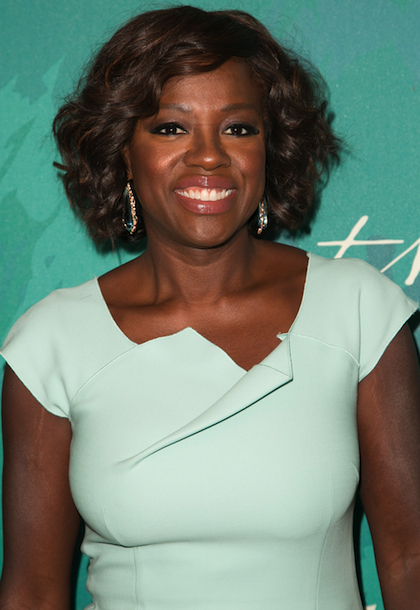 Ahh, what’s that smell? It kinda smells like... Award Season!

It’s that time again to glue our eyes to our TV screens in hopes of our favorite shows, films, and actors winning a Golden Globe! And I’m super excited, not only because I’m obsessed with award shows, but because my favorite actress is nominated! The stunning Viola Davis has been nominated for Best Actress in a TV Drama for ABC’s "How To Get Away With Murder", and she MORE than deserves it. I could probably go on forever as to why I believe she should get that Globe, but here’s a quick list to break it down for you!:

1. Her badass role in the show

She’s the leading lady in ABC’s amazing new series, playing Annalise Keating, a stylish and stern defense lawyer and law professor who does anything it takes to win cases -- including hiring her top students as assistants. Annalise is sneaky, sexy, and so smart, making it hard to look away from my TV when she’s on the screen. Her strong, square shoulders make her strut into courtrooms look so fierce. She’s super feisty, almost mean, but it just makes me want to be her friend even more! What do you say, Professor? BFFs?

Leading up to one of the groundbreaking episodes of the season, ABC teased fans by telling them that Annalise’s last nine words of the episode would leave fans in shock, and boy, did it do just that! Viewers had been wondering for awhile if Annalise’s husband was somehow tied to Lila Stanguard’s murder, and the last few minutes of this episode revealed the truth. The scene was written with Annalise sitting in her bedroom taking off her makeup and fake eyelashes. However, Viola took it a step further and removed her wig in the most powerful, intense way (gasp!). It was her idea to make it as real as she possibly could, and fans couldn't stop talking about how beautiful that scene was. She turned around to look at her husband, holding up Lila’s phone, and said those famous last nine words: “Why is your penis on a dead girl’s phone?” Dun dun DUUUUN! Her hubby totallyyyy did it.

3."How to Get Away With Murder"has over 16 million viewers

This show has been rated the most-watched scripted primetime series of this season in multiple publications, in large part due to Davis’s acting chops. That’s Golden Globe-worthy enough for me!

The New York Times published an article back in September written by a TV critic who said Viola was “less classically beautiful than [Kerry] Washington.” The piece sparked major controversy, but Viola fired back with class. At the People’s Choice Awards on Wednesday (January 7), she won an award for Favorite Actress in a New TV Series for her role in the show. She walked on stage and said with a twinkle in her eye, “Thank you, Shonda Rhimes, Betsy Beers, and Peter Nowalk for thinking of a leading lady who looks like my classic beauty. I’m so happy that people have accepted me in this role at this stage in my career.” YOU GO, GIRL.

5) She has won other awards, so why not add a Globe to the list?:

The 49-year-old beauty has been nominated for countless awards and has won a few (41) in her career. Let’s go ahead and add a Globe to the list!!!

So, what do you guys think? Do you agree that Viola is Golden Globe-worthy?