San Francisco's "Batkid" Getting His Own Movie Care of Julia Roberts 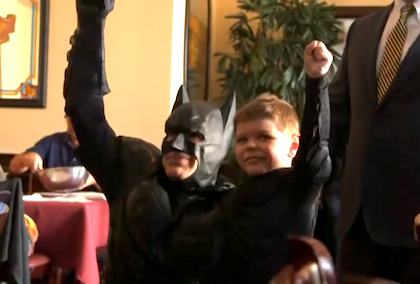 Do you remember a couple of years back when a kid in a bat costume went around a section of San Francisco called Gotham City and totally saved the day? If you happened to miss the amazing and inspirational coverage, then check it out right here:

As you saw, the kid in the bat suit is a young cancer (now)survivor named Miles Scott who was given a wish by the Make-A-Wish foundation for anything he wanted in the world. When asked, he simply said, “I want to be Batkid.” And so the charity went to work to set up a crime-fighting apprenticeship for young Miles. Much to the charity's surprise, a ton of citizens showed up from San Francisco, and around the country, the online support was tremendous. Now with a documentary entitled Batkid: The Wish Heard Around the World in the bag, Hollywood is looking to put Miles/Batkid’s story on the big screen with the help of Oscar-winning actress and first-time director, Julia Roberts.

Roberts needs no introduction, along with her brother (Eric) and niece (Emma). They’ve become one of those Hollywood families that always seem to be working on something and getting recognition. With her extensive work acting in many films and even producing a few, Roberts sounds like she’ll be ready to take a directorial turn and will also reportedly star in the film. This all comes back to that documentary Batkid: The Wish Heard Around the World, which, it is said that Roberts now has the rights to and will serve as the basis of the film, so it should give some indication with what exactly Roberts and company will make.

The documentary’s director, Dana Nachman, has publically said, "It's thrilling to me that Ms. Roberts and her team watched our film and were so moved by it that they want to dedicate their time and creative capital to make sure the widest audience possible will know and love Miles’s story." Nachman will also be involved in the feature film as a producer.

Speaking of Batkid: The Wish Heard Around the World, it had its premiere this past Saturday at the Slamdance film festival in Park City, Utah. Who knows? Could be a few months before it’s on Netflix and/or Amazon Prime, so check out the trailer until then:

Also check out the time that YH had the honor of assisting the Make-a-Wish Foundation in giving another courageous young man a day he'd never forget: