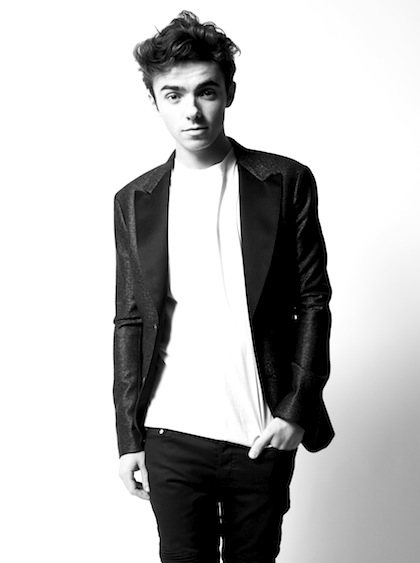 Great news for all of you Nathan Sykes fans!

The Wanted's youngest lad is going solo, which means soon you can stalk--er, watch him more closely, listen to tons of songs with just HIS voice, and replay them over and over and over again. Sounds like a good deal to me!

And maybe another collab with Ariana Grande will come out of this!? C’mon, I know you were all thinking it.

In the meantime, the 21-year-old singer has confirmed actual collaborations with big names such as Harmony Samuels (Ariana Grande, Chris Brown, Ne-Yo), Babyface (Whitney Houston, Paula Abdul, Usher), and songwriting powerhouse Diane Warren (Celine Dion, Aerosmith, Beyonce) for his debut album, which will be out later this year. The first single from the album will be released this Spring, so keep an eye out!

Nathan worked with Harmony on the 2013 track "Almost is Never Enough" with Grande and is currently working with him now on the solo album. Harmony is the Executive Producer, so you KNOW it will be good.

“There is no one to hide behind anymore! It’s so exciting though. I have an amazing team, and I get to be really involved in the whole process, and I can’t wait to get back out on stage again.”

Nathan is so thrilled to be a soloist, and we can’t blame him!

“From being one-fifth of a group to being a soloist, there is always the chance to surprise people, as they are only now seeing 100% of me for the first time,” he added. “It’s like a second first impression, and whereas I don’t necessarily think it’s important to change people’s perceptions, I do think it’s exciting that people won’t just see me as ‘the young one in The Wanted’ and can have the freedom to judge me as an individual and not just ‘that bloke from that band’.”

We believe in you, Nathan!

So what do you think, guys? Will you support the cutie in his new venture? Sound off in the comments!