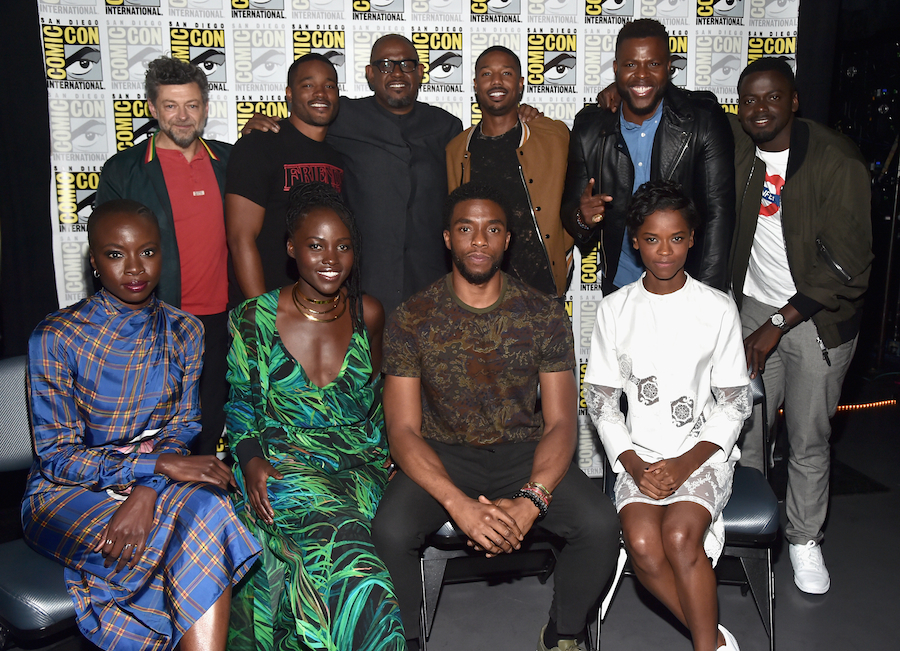 With the Golden Globe nominees announced last week, and the SAG Award nominees released this morning, the Award Season picture is becoming clearer as we march full-steam toward the climax, AKA The Oscars!

Now, just to be clear, the SAG Awards are dedicated exclusively to recognizing the work of the actors. So the films selected in the Best Ensemble Cast category should not necessarily be an indication of their worthiness for a Best Picture nomination at the Academy Awards, since that category takes ALL facets of filmmaking into account, not just the performances.

Having said that, though, many of the films nominated for Best Picture get to that point precisely on the strength of its outstanding ensemble of actors. So for, say, Black Panther to be nominated for a Best Ensemble SAG Award, the industry is saying that this film is not just about amazing action sequences and special effects – the power of the performances make it more than just your average superhero movie.

Having said THAT, a quick once-over of the nominees yields very few surprises and even less critical indie darlings. Indeed, most of the nominations feel bent toward the more “popular” properties of the year – films that scored high box office and/or received substantial film fest & audience buzz.

Let’s break this down…

- The Favourite, despite scoring individual nominations for all three of its main cast (Olivia Colman, Emma Stone, Rachel Weisz), somehow didn’t end up in the Best Ensemble category. Two might be considered a duet, but surely 3 is considered an ensemble?

- The Best Ensemble category almost perfectly mirrors the Golden Globes Best Drama list with one notable exception – If Beale Street Could Talk is out, and Crazy Rich Asians is in. Honestly, there could have been room for both these films had Bohemian Rhapsody not ended up in this category, a movie which, by all accounts, rested on the shoulders of Rami Malek’s performance alone.

- Streaming continues to take over on the television front, with Netflix leading the pack with 15 total nominations, followed by Amazon Prime Video with 8. Hulu comes in 6th place with just 3 (all for its flagship darling “The Handmaid’s Tale”). All told, streaming services racked up 26 nominations, which is 7 more than all other TV networks combined.

- Despite receiving a nomination for Best Drama Series at the Globes, FX’s “Pose” was shut out at the SAGs, which is unfortunate since that show’s primary strength is its ensemble cast bringing to life different stories of LGBTQ+ folks in the 1980s struggling through the AIDS epidemic and the NYC ballroom scene. The main cast is made up of gay, POC, trans, and female actors; if Hollywood (and its award shows) truly are concerned with inclusiveness, then this would have been a terrific opportunity to prove it.

- Emily Blunt managed to muscle her way into both Actress categories in two very different roles – A Quiet Place and Mary Poppins Returns. A testament to her abilities to effectively pull off a wide range of characters!

- The Best Actor category pulls a little of this and a little of that from both the Drama and Comedy/Musical categories at the Globes – this streamlining can give us a better idea of who we might see on the Oscars ballot next month: Christian Bale, Bradley Cooper, Rami Malek, Viggo Mortensen, and John David Washington are all now top contenders.

- Likewise, the Best Supporting Actor category is almost a carbon copy from the Globes, except for a trade of Sams – Sam Rockwell (Vice) is replaced here by Sam Elliott (A Star Is Born). Obviously I am thrilled to see Adam Driver’s name pop up here again – could it be that he will finally get some Oscar love this year?!

- The Best Actress category puts some things into focus as well – look out for the likelihood of Melissa McCarthy receiving her first Lead Actress Oscar nomination (she’s been nominated in the Supporting category before), along with other 100% Oscar virgins Lady Gaga, Emily Blunt, and Olivia Colman. Meanwhile, fellow nominee Glenn Close could lock down her 7th Oscar nomination (no wins yet) if Oscar voters love her performance in The Wife as much as Golden Globe & SAG voters do…

- “Atlanta” was nominated for Best Ensemble Cast in a Comedy Series yet no love for any of the individual castmembers, including its star & creator Donald Glover. In fact, despite the show’s success at other major award shows, Glover has NEVER been nominated for a SAG Award, and this is the first year the show itself has made it on the SAGs ballot, period.

- Once again, “Westworld” is pretty much ignored at this award show, getting one measly nomination for Best Stunt Ensemble for a TV Series. Did I hallucinate all those gushing accolades from viewers and critics alike earlier this year?!

View the entire list of nominees here and let us know who you’re rooting for! And tune in on Sunday, January 27, to see if your faves win!