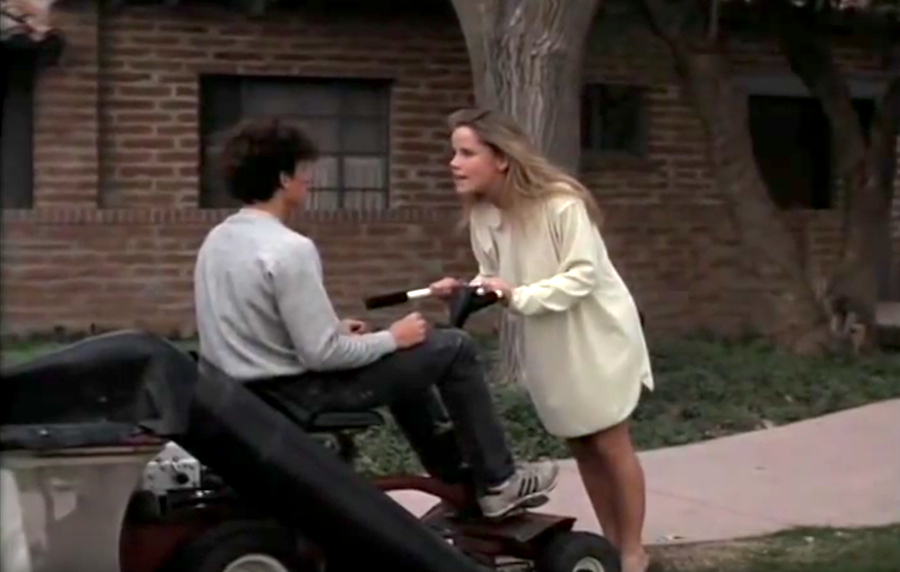 I think we can all agree that the '80s were the pinnacle of rom-coms. The decade brought us some of the greatest rom-coms of all time, including When Harry Met Sally, Say Anything, Dirty Dancing, and Pretty in Pink. Since Valentine’s Day is upon us, I decided to review another classic '80s rom-com, Can’t Buy Me Love. Referenced in the more recent rom-com Easy A, Can’t Buy Me Love is delightfully campy and deserves more love than it gets.

The original title of Can’t Buy Me Love was Boy Rents Girl, which is quite literally the entire plot of Can’t Buy Me Love. The film stars an incredibly young Patrick Dempsey with wild '80s hair, as well as Amanda Peterson (R.I.P.). Dempsey plays ultimate nerd Ronald Miller, whom we know is a nerd because he rides around on a giant lawnmower in order to get money to buy a telescope. I found that this made Ronald instantly likable, because who wouldn’t love someone that’s mowing lawns to buy a giant telescope? That’s so incredibly nerdy that it’s awesome.

Ronald primarily mows the lawn of the pretty and popular Cindy Mancini (Peterson), who drives around in a convertible and whose two best friends may be suffering from a perpetual static charge (their hair never falls flat, not even for a second). Naturally the cool girls can’t interact with Ronald (or, as they sadly call him, Donald), so he’s forced to creepily gawk at them practicing their cheer routine. How no one is bothered by this random nerd staring at them is beyond me. Perhaps everyone just assumes he’s the waterboy?

Ronald decides that he’s tired of being "a nerd who goes to football games and sits on the visitor’s side" (which has to be the saddest line ever muttered in the history of film), so he decides that the way to get popular is through Cindy Mancini. Luckily for him, when Cindy’s mom goes out with her boyfriend (who clearly washes toilets for the mafia), she is able to borrow her wonderfully '80s suede suit. The suit looks like a skinned yeti laced with fringe and is fabulous. The fact that everyone is impressed by Cindy wearing a skinned yeti makes her an instant '80s badass. What makes her less of one is when a jock spills his wine on it, and she is forced to let Ronald "rent" her for $1,000 so she can buy her mom a new one.

Strangely enough, that turning point is not the craziest part of the film. Is it creepy that he basically treats Cindy like a prostitute? Yes, but... no, on second thought it’s a bit creepy. Where the film really starts to turn crazy is with the side characters.

My favorites by far were the popular jock guys. One most definietly has to be 40 and clearly is just being held back because he’s a good liner. He serves no purpose in the film whatsoever other than to release silent-but-deadly farts primarily in the face of Ronald’s spying younger brother (played by Seth Green!). Every time the 40-year-old high schooler let one rip in Green’s face, I lost it. Since I am 12, this was by far the best part of the movie, and I found myself looking forward to it every time it happened.

The other jock apparently has no idea what a shirt is, and cooks in only an apron in Home Ec. I don’t know about your high school, but we (a) didn’t have Home Ec. because of budget cuts, and (b) would have never allowed someone to cook in just an apron. No one at the school seemed to notice or care that this student had no concept of a shirt. It was just strangely accepted, like the fact that nerdy boys can rent popular girls.

Naturally, Cindy and Ronald’s relationship goes through a few obstacles (I don’t want to give too much away), but there are periods where Ronald decides to date a few other lucky ladies. One of them is treated to Ronald’s incredible dance moves, which alternate somewhere between a dying hippo and a monkey having a seizure. Since Ronald becomes “popular”, a few notice that he may need medical attention, but the rest of the school decides his dance is “hip” and that everyone should indulge in it. This culminates in one of the greatest high school dance scenes ever to grace high school films, with Ronald and the entire school flailing about like monkeys having  a seizure: