'Rocky' Spinoff Film 'Creed' Looks Determined to Stand on Its Own 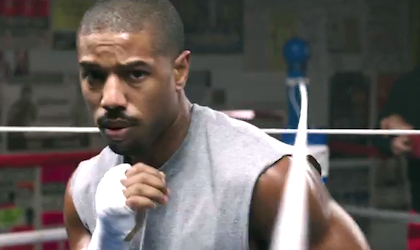 I don’t think I could count myself as the only skeptic on this spaceship Earth of ours back when Creed was first announced way back when. The hesitancy to embrace this project most likely came from the notion that 2006’s Rocky Balboa did a fine enough job bringing closure to the Rocky series. The idea of Creed just seemed like a back alley way of getting back into the franchise without looking like they were outright destroying the well that most other folks just revisit once too often. Well, I’m willing to admit that the odds are looking very much in favor of me being proved wrong, because the trailer for Creed looks amazing.

Michael B. Jordan (everyone’s soon-to-be favorite member of The Fantastic Four) is playing the title role of Adonis Creed, and judging from the trailer, this movie belongs to him and him alone. I think that’s why everyone, including myself, wrote the movie off initially -- because we assumed that Adonis would just be a means to get Rocky back on the screen, and the idea of a film’s title character being nothing more than an excuse is fairly lame. But luckily, this does not seem to be the case, as the film looks to have an award-worthy polish to it, as well as an emotional intensity courtesy of our lead actor Mr. Jordan, who has spent the last couple of years impressing folks with his marvelous performances. I should also point out that the film is directed by Ryan Coogler, the same man behind the much-acclaimed 2013 film Fruitvale Station which also featured Mr. Jordan in the title role.

The fact that Sly Stallone is back playing what is arguably his most famous character (we all know that Cobra is way up there too) is nothing to simply dismiss with the flick of a boxing glove either. Rocky is a film classic as well as the undisputed champion of the underdog stories, and the return of that film’s central character deserves some attention. Just try to forget about the sequels that had him ending the Cold War, fighting Mr. T, and ordering a robot to serve his drunk brother-in-law birthday cake. I’m not the first person to point out that you’re seeing Rocky playing the role of the aging mentor in this film, which means that time has come full circle and that Balboa has essentially become the Mickey (Rocky’s old trainer) of the story. Well... he sort of assumed the role of mentor in Rocky V as well, but for some reason, we’re not allowed to talk about that movie, so just forget that I mentioned it. The mentor angle is interesting because Rocky has finally moved past proving himself in the ring, so whatever possible closure the film has in store for us in regards to the Italian Stallion will have to be sought in a different way.

The quote that Adonis recites at the end of the trailer was spoken by Rocky in the last movie, and notice how Adonis refers to the author of that quote in the past tense. Oh dear, I’m starting to get a little teary-eyed just thinking of the implications...

Anywhoo, enough speculation for now. The only thing we really know for sure is that the trailer looks great, so take a peep and prepare for possible greatness on November 25 when Creed hits theaters!